Former Arsenal youngster, Chuks Aneke, has signed for MK Dons on a one-year deal with an option included for an additional year.

Aneke signed for Arsenal when he was just eight and remained at the club from 2001 until he was finally released in 2014 following a series of loans to Stevenage, Preston North End and Crewe Alexandra.

Snapped up for free by Zulte Waregem in the Belgian league, he signed a three-year deal but would remain there for only two before moving back to England to join MK Dons. No transfer fee has been revealed at the time of writing.

The attacking midfielder featured in only 11 league games last season, scoring two and averaging 77 minutes per game, partly due to a knee injury he picked up in December that required surgery.

Now 23, Chuks will no doubt be hoping he fairs better with the Dons this season after a lengthy rehabilitation. 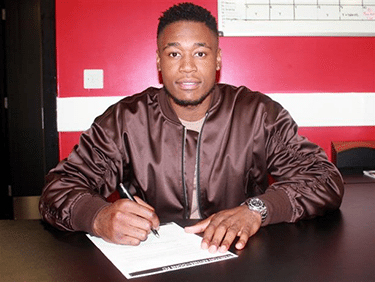 Speaking to their official site, Aneke said, “I’ve known about this Club, the manager and the staff for a long time, so I’m delighted to be here.

“I’m on the other side of my injury now, so I’m looking forward to completing my rehab and playing some games – I feel like I’ve got a lot to prove.

“I’m happy to be at the Club and hopefully I can bring some of what I can do into the team.”

MK Dons are happy that the knee injury should not pose a problem, with Simon Crampton, Head of Sports Medicine with the club, reassuring fans, “Chuks had a successful routine knee operation last season and has been rehabbing in Belgium.

“He hasn’t reached full fitness yet but he will now come under our care as we aim to get him in the best possible shape for action.”

Manager, Karl Robinson, was very excited by the whole thing. “Chuks is someone we’ve known about for a very long time,” Robinson said. “He’s a very talented player and I’m excited to work with him.

“While he isn’t ready for match action just yet, we didn’t want to miss out on bringing him to the Football Club. Also, with the abolition of emergency and youth loans outside of the transfer window, we are limited to what we can do during the season.

“We wanted to have Chuks here at the Club now so we can take control of his rehab and he can be around his new teammates.”