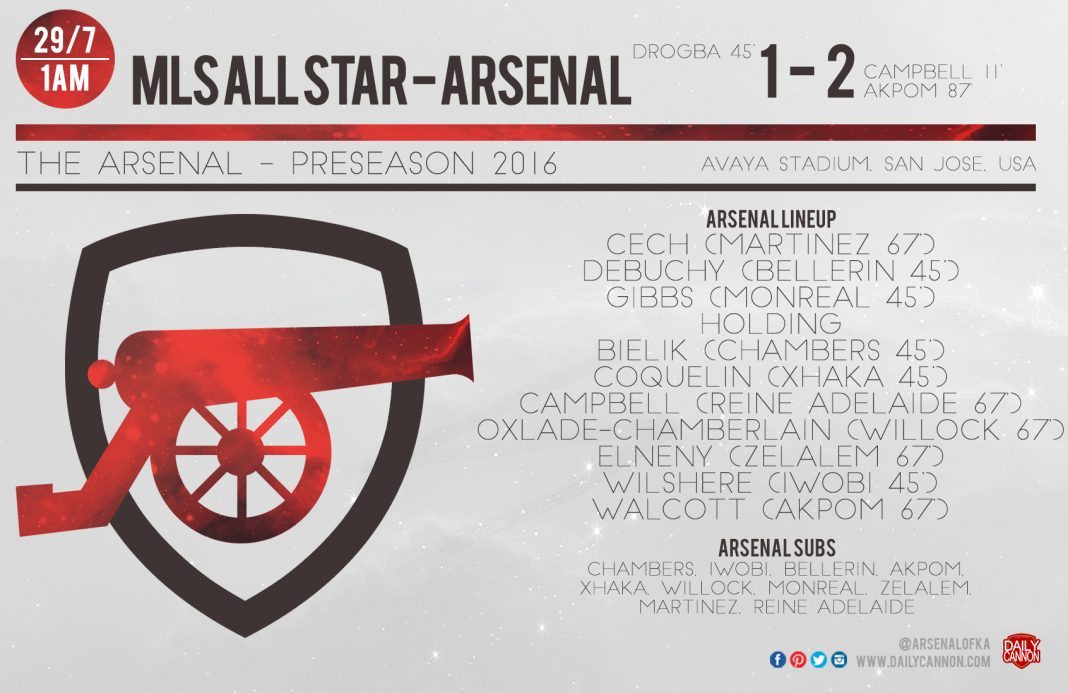 As Stephen Bradley already wrote this morning, we shouldn’t read too much into what was partly an exhibition game for the MLS and partly an exercise in developing match fitness for Arsenal.

But every game, no matter how apparently meaningless, has value and points of interest. Particularly when considering that Arsenal are the only London club to play the All-Stars in pre-season and not lose.

So what did we learn in the early hours of Friday morning?

Rob Holding can do a job already: having written positively about the new boy on Monday, it was good to see him look so comfortable both alongside initially Bielik and then Chambers. Composed on the ball, his distribution grew as the game went on, and he made some good blocks and tackles. He was unlucky that his excellent block of Drogba’s shot went straight back to our Ivorian nemesis. Elsewhere in defence, Chambers remains a player who shows promise alongside lapses of concentration, and Bielik looked as you’d expect; talented but definitely not ready yet.

Neither of our striking options stood out (despite the bizarre MVP award to Chuba for his tap-in), but it seems to me that the academy product may fit better with our style of play at centre-forward. Theo is quicker, more subtle, a better passer and a better finisher, but still seems very uncertain about how to approach centre-forward play in this team. As a supplementary option in a 442, he’d be able to simply bring his inside-right game a little narrower, but as a lone front man, his movement is only really effective when we counter or stretch the play.

Chuba’s movement when we have extended possession on the edge of the opposition box is sharper and more definite, and for all the roughness of his game, he’s had a nose for the six-yard box tap in at every level (except at Hull who expected him to be more of a Welbeck type). This isn’t to say Chuba is as good as Theo. But I reckon late on, against massed defences, he’d be a more effective substitute.

Xhaka isn’t flawless, but he is a significant improvement

A good first showing from our new man. He’s basically a bigger, younger, better left-footed Arteta. Like the Instagram deleting Spaniard, his lack of recovery pace and tendency to dwell on the ball in deep positions does cause some concern, but that left foot looks even better in the red and white of Arsenal than in the same colours for Switzerland. It’s the range and different types of passing that are so impressive. His physical strength and set piece delivery also stood out, with the latter having the MLS back line looking very uncomfortable. Plus he has personality. He wants the ball and he wants to control the game. We might let in more counter-attacking goals with him in the team, but he’s going to make a number of his teammates very happy.

The Frenchman looked composed, intelligent and determined and gave a very decent performance in the first half. Then Bellerin came on and our right side suddenly looked twice as good. Sorry Matthieu, but you’ve got no chance.

Jack is still a long way off his best

Fresh from being one of England’s summer scapegoats (despite creating more against Iceland than anyone else), Jack looked like a player who hasn’t played much of late and also one who no longer knows how to play the number 10 role. Which, given that what little he has played in the last 48 months has mostly been in other positions, probably shouldn’t be much of a surprise.

The kids are alright

In a game whose tempo was massively disrupted by epic numbers of subs, it was the Arsenal youngsters off the bench who, bar Xhaka, impressed the most. Willock remains frighteningly thin, but his close control, movement, crossing and team awareness were all on display. If he develops physically and keeps his head screwed on, there’s a future first team squad player there.

Jeff again showed the oozing raw talent without being totally convincing, and he seems to be more continuously involved when brought on as a cameo. Zelalem, like Willock, is still physically under-developed, but his passing is so crisp and precise. Seems more of a deep-lying playmaker these days. Iwobi remains a little inconsistent and raw, but boy does he make things happen. And as we saw last season, there are no concerns about his physical development. The aforementioned Bielik and Akpom did themselves no harm either.

Overall, it was all a bit pre-season stroll-ey, and the absence of the quality and dynamism of Alexis, Ozil and Ramsey was clear for all to see. As was, shock horror, the need for a striker…