I left home over four years ago.

In doing so, I left behind much of my Arsenal stuff, in part because there’s much less room in a flat than a house, and in part because I was too lazy to move anything I wasn’t likely to wear in the next seven days.

Consequently, when I finally got around to clearing out my old bedroom today, after approximately three and a half years of being nagged to do so, I stumbled upon a treasure trove of memorabilia.

My very first Arsenal shirt sporting a JVC logo and navy piping, full kits in red, blue and gold, and even training kit from over a decade ago. Most of the shirts are in large kids’ size, but Nike’s unwillingness to design anything for ladies is a post for another day. Needless to say, credit where it’s due to Puma for finally bringing out some women’s merchandise this year!

Delving further into my collection, I discovered a pair of Arsenal goalie gloves from my years playing football on the street, and a punchy T-shirt declaring that “I’m a girl, I’m a footballer, and yeah, I’m gonna kick your butt!”

And then things got depressing.

Firstly, a 125th anniversary shirt with ‘v. Persie’ emblazoned across the back. Next, a Gunnerblog creation with a larger-than-life image of Fabregas’ face accompanied by the message “Cesc we can!” 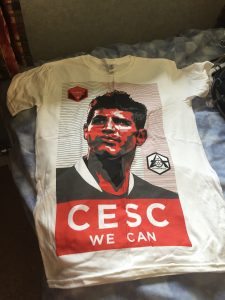 Clearly, any merchandise relating to players who left the club in less than happy circumstances is pretty sad, and perhaps my choice of which players to support leaves something to be desired too – certainly every player who adorned my walls as a teenager left the club acrimoniously (oh, hello Cashley!)

But it was just as depressing to think that those shirts were purchased in 2010/2011, at a time when we felt our enforced austerity was ending and we were about to get back to winning ways. The false optimism, the hope that a couple of quality additions could push us level and beyond our top four rivals in the race for the title, and the comedown as year after year we fell short – sometimes by the smallest of margins, sometimes by a country mile, but always short nonetheless.

It feels like the distant past now, that Van Persie and Fabregas represented our great white hopes. Instead, by the summer of 2012, both players had left the club.

We now have a new generation of players to pin our hopes on; without wanting to tarnish our stars by comparing them to the devil incarnate, you could say Ozil is the new Fabregas, Alexis the new Van Persie.

And while there’s a certain schadenfreude to be had when you look at the perilous situations both former captains currently find themselves in, both left to a certain extent because we failed to add sufficient quality to our squad to make it a place they wished to stay indefinitely.

Both Ozil and Alexis have two years left on their current deals, and you have to think that our decision making this summer will have a huge impact on how likely they are to sign on again.

Arsene has a reputation for convincing players to join Arsenal, even when they’re coming from clubs like Real Madrid and Barcelona, but he has just over a month to use those convincing skills to add to his squad, in order to keep them here.

Paul wrote earlier in the week about his frustrations, where the calmness of a few weeks ago is starting to evaporate as the clock ticks closer to September 1st, and while I’m probably lagging a few weeks behind him in his assessments, I can’t help but feel nervous that we appear to be heading for brinkmanship.

We’re already missing our French contingent for the opening game at least, which means we’re without our first choice in two positions we are looking to make a signing anyway: a striker and a central defender.

I’d like to think that there’s a master plan in place, but the remarks of Kim Kallstrom suggest otherwise. The Swede recently spoke about his experience signing for Arsenal, where the late discovery of fractured vertebrae saw him signed anyway, simply because it was too late to find an alternative. Hopefully we’ve learned our lesson.

(Incidentally, Kallstrom’s remarks offer an excellent read. It’s easy to forget while we’re bemoaning not being a Real Madrid or a Barcelona that actually our club does have a certain reputation of its own, and he shares a real sense of pride to be wearing the cannon on his chest as he describes taking his penalty in the FA Cup shootout in 2014.)

Where was I? Bemoaning our lack of timely transfer activity.

Realistically, we have about a week to make a material signing, before we are in the position of entertaining Liverpool with the same squad we finished last season with, plus Xhaka and Holding.

I currently have shirts hanging in my closet with Ramsey, Koscielny and – somewhat bizarrely – Gibbs on the back, and while I doubt they’ll cause us the same heartache that van Persie and Fabregas inflicted over the years, I couldn’t help but hope – as I reflected on the previous names and faces to adorn my apparel earlier today – that we pull our fingers out before it’s too late.

That matters in terms of our opening fixtures, of course, but just as importantly our star players.