Let me tell you right at the start – Koscielny is my favourite Arsenal player.

Okay, Mesut Özil is, like, half a point behind him but nonetheless, Koscielny is the only one who has the privilege to be on the back of my Arsenal shirt at the moment. I like everything about him: his style of play, his calmness in difficult situations, even how he can do a stupid thing now and then, it makes him normal human being. Not to mention how much of a bargain he turned out to be.

This week marked six years of signing this then rather unknown (to me at least) defender from French side Lorient. Reports saying Arsenal paid £8.5m for him, which these days is basically pennies. Especially when you look at any papers reporting about Euros.

Koscielny, as many other Arsenal players, was very underrated and unappreciated by most of footballing world and he managed to grow into probably best centre-backs in Europe with only Wenger and Arsenal fans seeing it happen. He has been the most important figure in Arsenal’s defence for at least three or four years and yet was ialmost always forgotten when “team of the season” articles were being written.

He got the recognition he deserves from the rest of football world this season and especially during Euros. He is probably one of two or three French players who has a guaranteed place in first team of Euro finalists.

In the infographic this week, I took all my love for Koscielny and added some stats to it, to show how great of a player he has been for our club. These are still only numbers and the true importance of Koscielny is visible on the pitch in every match he plays. I hope he wins that trophy tomorrow and a few more come this time next year.

If you like the graphic, share it around, I’d appreciate it. Next week it’s time for Premier League fixtures. 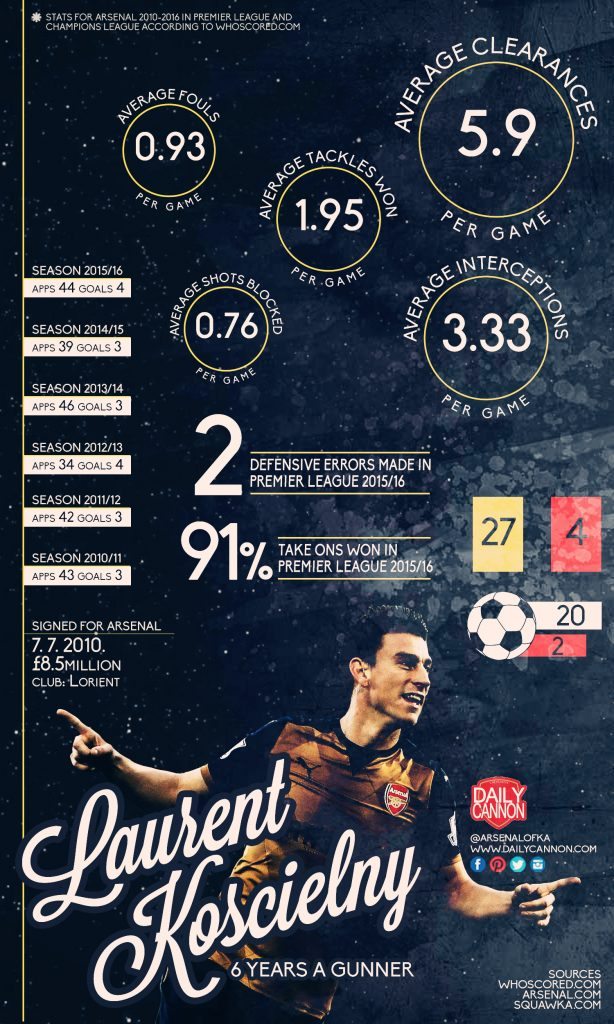 Where does Arsenal’s season rank in their worst so far?