As there were no games this past weekend for the Arsenal Ladies first, reserves and u17 sides, we will focus on the 2015/16 Development team currently top of their league and still in the FA WSL Development League Cup. 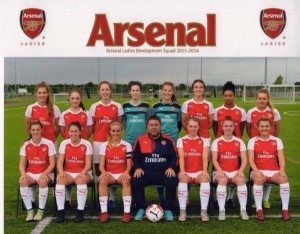 27. Sian Rogers signed from Birmingham at the beginning of the season. She is likely to play back-up to Sari Van Veenendaal once Emma Byrne retires. She plays for England u19.

40. Shona Allen came up from the very succesful u17 side from last season. A young goalkeeper who is learning her trade.

24. Lotte Wubben-Moy: the tall centre back captains the England u17 side and has already played a few games with the first team and has a great future at the Arsenal.

29. Chiara Ritchie-Williams: she can play either at right-back or at centre back; a marauding defender with excellent long ball passing that allows her to regularly find the forwards in the space on the break.

31. Lucy Parker partners and complements Wubben-Moy very well at the heart of the reserves team defense. A solid player.

32. Kelsey Kiely: she can play at right-back or centrally and has been used as an utility player this season while first choice last season at right-back. A consistent performer.

33. Phillipa Cowley: the left footed left-back was part of the squad that won the u17 youth cup with Leah Williamson and Carla Humphrey.

37. Jessica Driscoll: a right footed left-back or left winger that came up from the u17 side at the beginning of the season. She can also cover at right-back. A modern attacking full-back.

*Taylor Hinds: the England u17 has recently been added to the reserves squad. A talented player who could have a great future at the club if she carries on developing well.

28. Charlotte Devlin: a creative attacking midfielder. She was involved in the Continental Cup last Summer when Pedro Losa gave a chance to the young players.

30. Georgia Allen: the classic playmaker has made appearances for the first team already, coming on as a sub in important league games. She can learn a lot from senior players like Losada and Van De Donk and has the potential to be a top player for the Arsenal.

35. Chloe Brunton-Wilde: the classic defensive midfielder. Very tidy and who knows her role in the side and contributes well by bringing a balance to the team.

39. Alysha Stojko-Down: she was superb and consistent last season but has been reduced to a part time player coming on as a sub and not getting the starts she deserves. Her vertical passes are second to none.

*Anna Filbey: the England u17 midfielder has been added to the reserves squad recently and is an important player in the Arsenal Ladies u17 squad.

18. Chloe Kelly: technically a first team player, she just turned 18 last month and could play some games this season with the development team as she did in the cup game away to Liverpool. A typical goalscoring forward full of confidence.

25. Evie Clarke (c): the team captain, a winger with a strong character and willingness to play. Very persistent and a born winner with excellent leadership.

26. Rianna Dean: the young centre forward came up from the u17 side last Summer and leads the line. Scores goals and provide some assists as well. She was involved in the Continental Cup game last year when Pedro Losa rotated the squad and gave the youth a chance.

36. Florence Fyfe: the winger came up like many of her teammates from the u17 side and can play on either wing. She is a regular starter for the development team.