Arsenal need to beat Olympiacos and beat them well on Wednesday night, but were without Aaron Ramsey and Mesut Özil on Tuesday morning.

The two midfielders didn’t train before the team left London and were reportedly only rested after completing 90 minutes each against Sunderland on Saturday. Both players have travelled to Greece and both should be able to start the crucial game.

Petr Čech will start in goal for the Gunners, having played the last three Champions League matches. The season started with David Ospina in goal but no more risks have been taken since his blunder helped Olympiacos to a 3-2 win in London back in September.

At the start of the season, Wenger also rotated his defenders in Europe but has stuck to a more favoured backline in recent matches. That means Per Mertesacker – who will captain the side – and Laurent Koscielny should be flanked by Spanish fullbacks Héctor Bellerín and Nacho Monreal.

In the pre-match press conference on Tuesday evening, Arsène Wenger confirmed that his team would feature Mathieu Flamini and Aaron Ramsey in midfield.

Ramsey was excellent in midfield against Sunderland on Saturday, scoring and assisting, but hasn’t played a great deal of football since returning from injury and wouldn’t have missed training on Tuesday morning without any concerns. Maybe Arsenal are just being very cautious with him, but it does create some concern.

The same applies to Mesut Özil, who will start such an enormous match but also didn’t train on Tuesday morning – again likely just the club being cautions with him.

Alex Oxlade-Chamberlain and Joel Campbell, who scored on Saturday, are likely to start out wide once again with Alexis Sánchez still injured and Theo Walcott only just back from injury. The Englishman played around half an hour at the weekend but they were his only minutes on the pitch since the end of October.

That leaves Olivier Giroud to lead the line once again, unless Walcott is indeed fit to start.

So, the same XI as Saturday? The same result would see Arsenal through to the knockout rounds – fingers crossed! 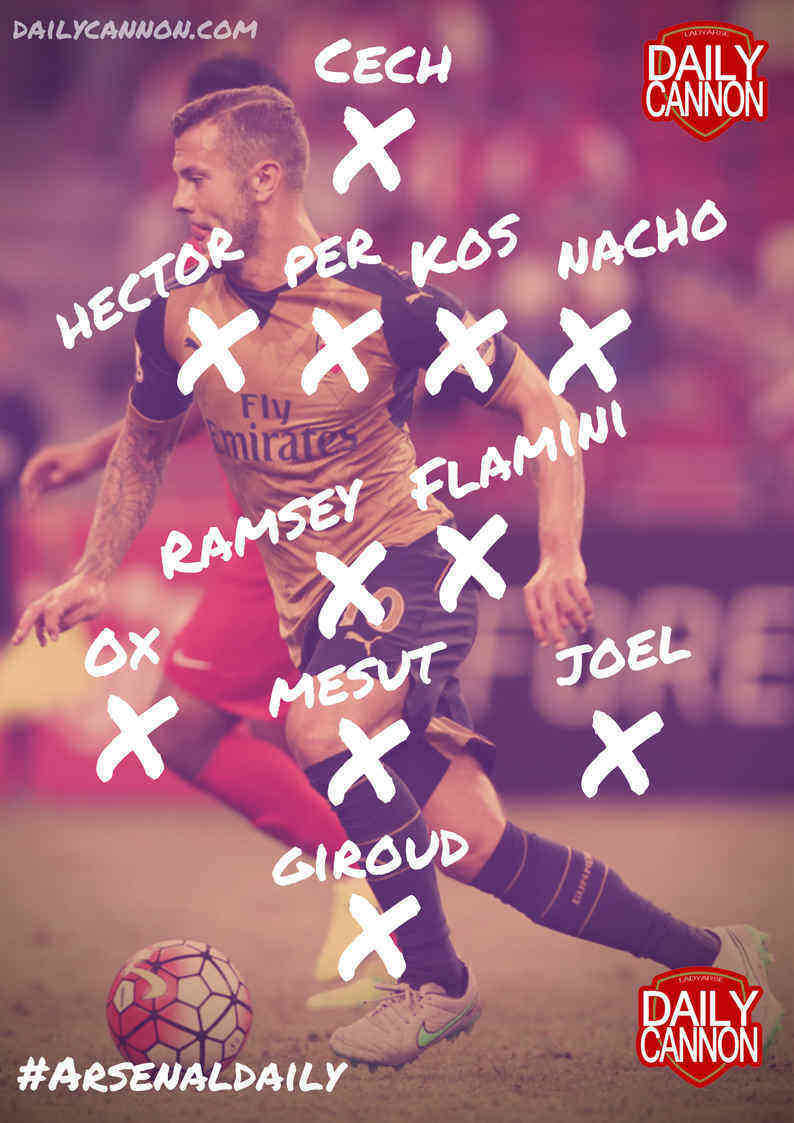 Tierney to start: How Arsenal could line up vs Benfica

Pepe replaces Smith Rowe: How Arsenal could line up vs Manchester City

Thomas Partey injured: How Arsenal lined up vs Aston Villa

Saka returns: How Arsenal line up vs Wolves

Thomas Partey fit: How Arsenal could line up vs Manchester United

Creativity returns: How Arsenal could lineup vs Southampton