After a difficult week in which Arsenal’s French contingent were mentally assaulted by the atrocities committed in Paris, fans were looking forward to a conceivably easy road victory over West Bromwich Albion.

And while the day started off well with a typically sumptuous cross from Mesut Ozil and a trademark header by Olivier Giroud, it soon dissolved into a farce befitting a club as banterous as Arsenal. A Mikel Arteta own-goal and tidy James Morrison finish condemned Arsenal to defeat.

In a shocking twist, the loss encouraged swarms of Arsenal fans to take to Twitter and criticize the squad, Arsene Wenger and all of his choices, footballing or otherwise. After allowing the loss to stew in the pit of my stomach (with the help of an alcoholic concoction and the joy of seeing Liverpool shred Manchester City to a billion pieces), I’ve taken it upon myself to make sense of one of the more difficult games Arsenal have experienced in the last week or so. Here are five things I took away from the match: 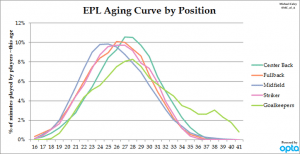 Click on image for full-resolution image. Arteta is 33 now, so it’s understandable that he can no longer stay fit. This aging curve by position demonstrates just that.

As much as I love Mikel Arteta (and I loveeeeee Mikel Arteta, and his perfectly coiffed hair), it is probably time to accept that his days of being a reliable player at the highest level are almost certainly gone. You can diet, do yoga, avoid traumatic injury and adjust your game to suit your diminishing physicality, but your meeting with Father Time can only be delayed. As in life, Father Time is undefeated.

Arteta, seemingly being groomed for a coaching role in the future (he already mentors youth players at the club) still has his wits about him. A player of Arteta’s pedigree, bred at Barcelona, educated at PSG and Everton, then fully-realizing his potential at Arsenal, should, in theory, be able to sustain performances deep into their thirties, but Arteta’s body simply won’t agree with him.

Arteta still has the touch, the technique and the intelligence to waltz through midfields and dovetail with Ozil, Santi Cazorla and the rest of the attack, but the calf and hamstring injuries have become chronic to the point that the euphemism “he’s on his last legs” is almost literal. It’s a sad end to a lovely career, but the Arsenal legend (yeah, I said it) has perhaps stayed-on one year too long. Had he retired in the Summer, perhaps Wenger would have dipped into the market for a replacement.

2. …But it wasn’t really his fault

Arteta, along with Giroud and Per Mertesacker, is a magnet for unfair criticism. Giroud keeps on scoring at a prolific rate (he is now the 3rd-leading goalscorer in the Premier League with seven goals from seven starts), but Arsenal fans continue to insist he isn’t good enough. Mertesacker will forever be called “too slow” by fans despite his positioning, awareness and speed of thought being 2nd-to-none. Alas, when Laurent Koscielny reacted poorly to Harry Kane’s run (Mertesacker and the rest of the defense were playing him offside by a mile) it was the BFG who drew Twitter’s ire. Arteta was similarly torn apart today on Twitter for his performance despite doing little wrong. He conceded the set-piece from which West Brom scored their first goal, but it was, on repeated viewing, a good challenge. It isn’t Arteta’s fault that the defense went AWOL on the set-piece or that the referee got the call wrong.

Furthermore, it wasn’t Arteta that lost James McClean and allowed him to get to the byline (that would be Hector Bellerin). Arteta was pressed into action. Any defender will tell you that facing your goal and not knowing who’s ghosting-in behind you is a very vulnerable position to be in. Arteta could have done better with his attempted clearance, but Calum Chambers scored that exact same goal against Tottenham Hotspurs in the League Cup. Koscielny has scored that goal too. It’s as if the lack of pace is just an easy deficiency for fans to target in lieu of critically thinking about what truly transpired.

3. Alexis Sanchez was quite good 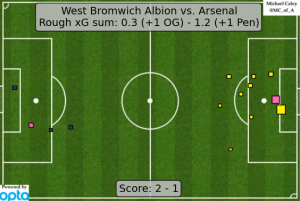 Despite Arsenal outshooting West Brom 11-4 (and 3-1 as far as shots on-target), it was mostly of the tame variety. West Brom took the lead and were content with parking the a double-decker bus on the goal-line. Fair enough, it worked. Ozil failed to contribute much after his assist and Giroud never sniffed another opportunity after his goal, but both were crowded out due to Kieran Gibbs’ uselessness and Joel Campbell’s strange decision to play with a blindfold on. Not what I would’ve done, but he’s the professional.

As such, space was tight and Arsenal needed someone to do something unexpected. With no Emmanuel Eboue in-sight, Alexis took it upon himself to force the issue. 11 dribbles, 3 key passes, fouled 5 times and a marathon’s worth of running was proof positive that Alexis hates losing and/or is an android. He must’ve thought his pressure proved decisive when he was felled in the box for a penalty, only to see poor Santi Cazorla cruelly slip and sky the shot.

4. Coquelin’s injury is unfortunate, but leads to interesting developments

Coquelin was subbed-off in the 13th-minute with a knee-injury. Wenger was quoted as saying it is probably more severe than the muscular injury Arteta suffered. An injury like Arteta’s would last 3-4 weeks at the least, so Le Coq could be sidelined for the rest of 2015 and beyond. With only newly-minted billionaire available to fill-in at DM and partner Cazorla, Wenger could be tempted to experiment. Not unfamiliar with toying with players’ positions, Wenger could conceivably take the returning Aaron Ramsey and morph him into the type of conservative, but flexible midfielder that would perfectly complement Cazorla’s deep-playmaking.

Flamini is simply not good enough anymore (I don’t care how rich he is), but Ramsey has the requisite tools to fill the role. Not only is he an accomplished passer, confident, but composed dribbler, he also knows hot to rack up the tackles and interceptions. He’ll never be as defensively active as Coquelin, but he offers so much offensively that Arsenal’s dynamic would improve in so many ways. Coquelin, for all his merits, is a non-entity when Arsenal are in possession, not as a passer, shooter or counter-presser, thus making life more difficult for the likes of Ozil and Alexis. Ironically, it was Coquelin’s own misplaced pass that forced him into the flying tackle that injured his knee. The irony itself probably shattered his ACL. With Ramsey in his place, Arsenal will be more open at the back, but more versatile and dangerous booming forward. The tradeoff is enticing, so hopefully Wenger gives it a try whilst Coquelin is sidelined. 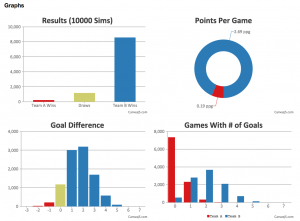 Thanks to Danny Page, we can use his Expected Goals simulator and Michael Caley’s expected goals data to see just how unlikely it is for a team to win 2-1 despite only having one shot on-target. It turns out it’s very unlikely. West Brom’s chances of winning were an astronomically low 2.4%. Of course, this is an imperfect method, but it does speak to just how unfortunate you could consider Arsenal for coming away with nothing. Sometimes, sh*t happens.