Sometimes you can’t have your cake and eat it.

We want our full-backs to be defensively minded players who prioritise keeping clean sheets above all else, but we also love our full backs to get forward in support of our attacking play. This marauding style makes sense since Arsene Wenger sides have always had a heavy reliance on the full-backs to supply width to the attack, and it is especially important in light of his preference for playing them behind either creative midfielders who would rather play centrally or ostensible wingers who would rather play inside forward.

It does mean our full-backs simply must be adept at attacking though.

Our two best attacking full-backs are unquestionably the younger pair – Hector Bellerin and Kieran Gibbs – both of whom offer pace, crossing ability and a desire to get to the by-line. However, it’s not quite as simple as playing both. In fact, as things stand, I would go so far as to say that they should not be playing in the same team unless there is simply no alternative, and that’s because if we do there’s no cake left for anyone to have or to eat.

I’ve written before on the importance of having balance between the two wide defenders, and it’s something that has been a theme throughout the Wenger era. He typically chooses a more conservative full-back on one side to counteract an offensive one on the other.

It’s also something that both Gibbs and Bellerin have yet to perfect, if you believe that your first choice full-backs should be capable of switching between the conservative and offensive roles. That’s at least part of the reason why we have witnessed the rise of Nacho Monreal.

The thing is, in a top team of intelligent players, you should be able to play your two best attacking full-backs together, as long as they use their brains.

Against Olympiakos, it was an all too frequent occurrence to see our two centre backs isolated towards halfway, while both Hector and Kieran hovered around the opposition box.

Now, against a side prepared to defend as obstinately as the Greek side, it becomes critical for your wide defenders to support the attack, bringing width and extra distraction. Some of our best chances came from interchange with Bellerin on the right wing. However, it has to be done in the right way.

What should not happen is for us to see both full-backs camped so far forward simultaneously. In the midweek game, when they went forward they stayed forward, irrespective of what they were adding to the team, and when the ball switched to the opposite side of the pitch, the second full-back stepped forward too and we were left exposed.

Clearly the pair of them are mildly aware that it introduces a vulnerability – neither of them tried to make many runs beyond their winger or took a defender on much on Tuesday – and all this succeeded in doing was to neuter their ability to have a positive attacking impact while presenting a very obvious defensive negative.

So what should they be doing?

This is your nice balanced sailing ship, and your standard framework when out of possession. It sees the full backs tuck in alongside their centre backs, and the midfield form a narrower block to force teams wider into less dangerous areas. It’s a solid shape that most teams adopt when they haven’t got the ball. 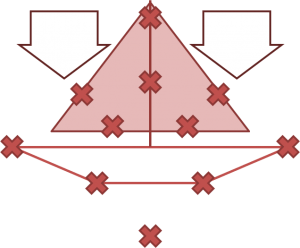 The challenge comes when we go forward, trying to work out how we can get the most from our personnel without overexposing ourselves at the back.

Attacking down the left, the sailing ship needs to tilt accordingly. This means the opposite full back tucking in beside the centre backs to form more of a back three and prevent us being left two on two at the back. 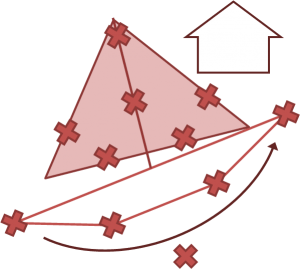 And when the play switches to the left side, and the opposing full-back moves forward to support, the right back needs to drop deeper and back in alongside the central defenders. 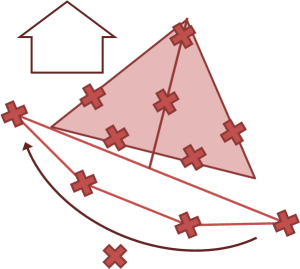 What should not happen is for both wide defenders to remain forward simultaneously. This is a deformed and unseaworthy sailing ship, with numerous holes in its hull. 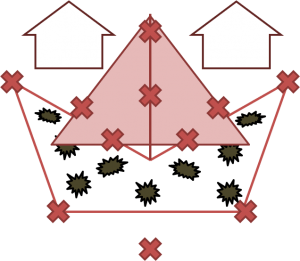 Of course, if you’re a goal down in the last minute, you’re pretty close to port (am I taking this analogy too far?) so you can leave your centre-backs to bail you out of trouble, but if you take these kind of chances too early, they won’t be able to cope with the flood of water and you will sink.

As I say, there’s no shadow of a doubt that Gibbs and Bellerin are out best individual full backs in an attacking sense, but they need to solve the conundrum of balance if they wish to play together on a regular basis.

Right now, Hector is the nailed on starter, so the onus is on Kieran to drive this change if he wants to displace Nacho. It is the Spaniard’s conservatism which indulges his younger teammate’s naivety at the moment.

It’s particularly crucial given that of our four most recent Champions League failures against Anderlecht, Monaco, Dinamo Zagreb and Olympiakos, Gibbs has played all four, while Bellerin and the similarly inexperienced Chambers played three. Room for improvement then.

There will be games this season where we need to field both Gibbs and Bellerin at the same time with no say in the matter, whether through injury or suspension, and adapting their play to work together is important for those games.

But if we can nail it on a more regular basis then it will allow us to utilise our full-backs in a more attacking way without compromising on defensive solidity, and that could be the different between winning the Premier League and not.

Something for the training ground, boys.