On Friday evening, our very own Helen Trantum wrote about Kieran Gibbs and argued that he should be back in the side ahead of the new season.

But I can’t say that I agree.

An excellent 2014/15 campaign saw Nacho Monreal win the shirt at left-back, and he has done more than enough to keep it.

Arriving at Arsenal in January 2013, Monreal was not the most proactive defender. Too often he would stand off his man, he wasn’t (and still isn’t) dominant in the air and he was overly conservative going forward. The following season saw Gibbs win the battle, with Monreal only occasionally getting a game.

A spell at centre-back during the most recent campaign seems to have revitalised Monreal, who has used regular football to work on what could have previously been considered deficiencies. The Spaniard is now a more rounded defender. Monreal himself has said that a regular run in the team has settled him down, and it shows on the pitch.

His lack of pace is overstated defensively, with quick wingers rarely getting the better of him. A visit to Crystal Palace last season saw Wilfried Zaha trouble Monreal in the opening stages, with the Arsenal man losing his footing twice as he looked to contain the rapid winger. Beyond the opening 20 minutes, having adjusted his balance and assessed the opposition, Monreal controlled the former Manchester United player expertly, limiting Zaha to one cross and no successful take-ons, compared to three (albeit unsuccessful) crosses and two successful take-ons early on in the game.

Nacho Monreal of 2015 is an assertive defender; a very different beast to the player Arsenal signed.

With Monreal on the left, Arsenal’s balance is much better. Arsenal’s right-sided defenders Héctor Bellerín and Mathieu Debuchy are naturally offensive, looking to overlap and get forward as often as possible. They can’t wait to get involved in attacks, and it doesn’t suit a team to have a defender like that on each side.

No blame can directly be given to Kieran Gibbs, but the defeat to AS Monaco in the Champions League may well have looked different if Arsenal had one extra defender whose first thought isn’t to support an attack.

That said, Monreal is not bad going forward. Gibbs is more eye-catching, attacking with more pace and getting to the byline more often. Monreal is more effective. He doesn’t have superb acceleration but he times runs superbly, and keeps a cool head when he gets into good positions. A superb cutting run against Manchester City won a penalty back in January, another saw Monreal receive the ball in the box at Old Trafford in the FA Cup quarter-final.

A year earlier in the same competition Gibbs had the opportunity to clinch the cup for Arsenal before blazing over the bar. Monreal cooly picked his spot and placed the ball beyond David De Gea in March to set the Arsenal team on their way. This isn’t to say Gibbs can’t score – important goals against Swansea and Anderlecht come to mind – but he isn’t as calm or thoughtful as Monreal when he bursts forward.

Perhaps that thoughtfulness is borne out of technique. Monreal’s first touch is generally cleaner than that of his counterpart, his passing more crisp. 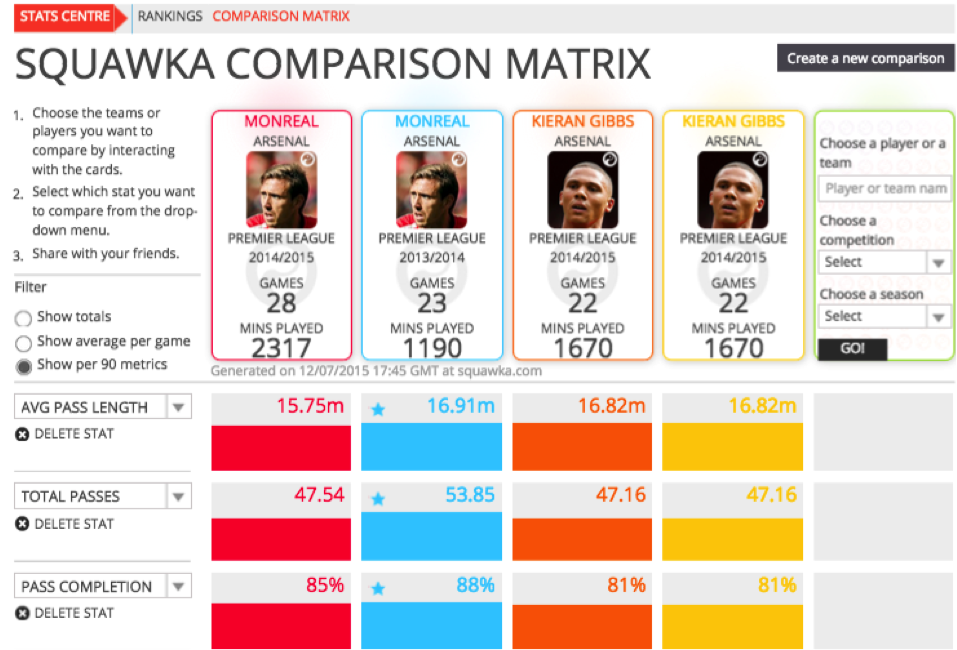 As a possession team it’s important Arsenal don’t lose the ball cheaply, and it’s certainly more secure at Monreal’s feet than at Gibbs’. As I already mentioned, he is not really any weaker going forward. His goal at Old Trafford by no means encapsulates him in front of goal – he is no proven finisher – but he is capable of impacting big games in the opposition half. He showed that twice in Manchester last year.

Lastly, Alexis Sánchez is the first-choice option for Arsenal on the left wing. By all accounts, the Chilean is even difficult to understand in his native Spanish. That’s what Barcelona teammate Gerard Piqué has said, before going on to say only Lionel Messi always understood his fellow South American at the Barça training ground.

With Alexis haring around like a madman from the left flank, it is nice to have someone behind him who at least speaks the same language. Since signing for Arsenal last summer Alexis is yet to give an interview in English, and considering his Spanish teammates don’t always understand him I don’t fancy his chances of communicating with Gibbs to well. Talking isn’t utterly essential but it’s clear that it’s better for Alexis, as well as whoever his behind him, if they can speak to each other.

Nacho Monreal’s form last season as his best in an Arsenal shirt. As we push on for title tilt this season, he has more than earned his place in the team and should best starting at left-back in August.

How Liverpool exploited Arsenal’s youngsters & how they can fix it

Who is Salah-Eddine Oulad M’hand?