Speaking in an interview with the Telegraph, the Chelsea manager, who despises Arsene Wenger (we know why) could hardly contain his disgust at his rival (Telegraph – (Mourinho refers to him simply as “Wenger”, almost choking on the word) but still found it within himself to agree when the Arsenal manager made a good point about the Ballon d’Or and football being a team sport not a sport for individuals.

Jose’d probably find he agreed a lot more with Wenger if he wasn’t too stupid to understand what Wenger was actually saying (we all know how he took Wenger’s ‘fear of failure’ comment in the wrong way and made an arse out of himself in the media).

“I think Wenger said something that is interesting; he is against the Ballon d’Or, and I think he’s right,” the bitter one said. “Because in this moment football is losing a little bit the concept of the team to focus more on the individual.”

“We are always looking at the individual performance, the individual stat, the player that runs more. Because you run 11km in a game and I run nine you did a better job than I did? Maybe not! Maybe my 9km were more important than your 11.”

Mourinho doesn’t even try to disguise his disdain for Wenger, a standpoint that comes from pure, unadulterated envy as we discussed. 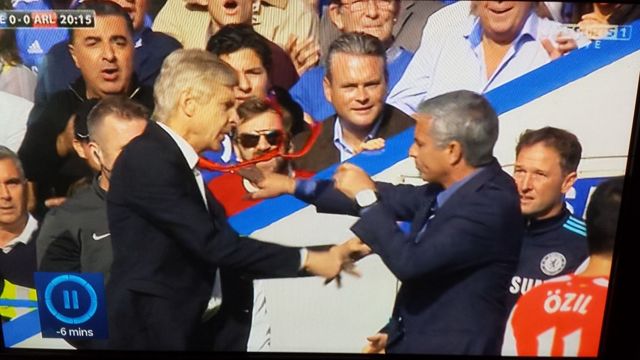 The not-so-special one seems to long for nothing more than to be as respected and well-loved around the world as the Arsenal manager and can’t understand why all the trophies he has bought doesn’t afford him the same.

Pound-for-pound, there’s no question who the superior manager is. And as for the superior human being? Ha, that isn’t even a competition.

“I think,” Mourinho said, “I have a problem, which is I’m getting better at everything related to my job since I started.

“But there is one point where I cannot change: when I face the media, I am never a hypocrite.”

And right there, in that one statement, you see everything that’s wrong with him.