Seven Arsenal players were involved in the latest England u17 friendly which took place against France u17 at Bisham Abbey last week.

Here is our report from the game that was played behind closed door, (the seven Arsenal players selected are in bold) 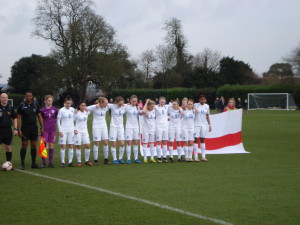 England and France were both defeated by Germany u17 (4-2 and 5-0 respectively) coming into the game and were looking for a confidence boost prior to the Elite round set to be played from the 9th to the 14th of April in Ireland.

England have been drawn into group two with the hosts Republic of Ireland, the Netherlands and Hungary.

Both managers rotated their squad from the previous games vs Germany in order to give playing time to the whole squad as always in these tournament series.

The game started with France on the front foot, with the left back Ollivier overlapping on the wing and sending a cutback that evaded all the French forwards.

A few minutes later Peplow sent Pacheco through but England’s left back put the ball wide of the goal.

The French team was building up play nicely, keeping the pressure on England’s midfield and winning the ball quite high on the pitch and they nearly opened the scoring when a corner from the right was smashed by Katoto past Maciver but Brown was ideally placed at the far post to clear the ball on the line.

The following England counter attack also nearly yielded a goal with Stanway managing to get away from the French defence and was ready to pull the trigger before a last ditch tackle from Piga stopped her in her tracks.

The match was wide open and England created a huge chance with Catline crossing from the right for Dean who’s header wrong footed Picaud in goal but went past the far post.

You could hear the loud England parents disappointment not to see the ball in the back of the net.

France had a few attacks with shots going off target before both sides tried to score from long range.

Katoto for France and Devlin for England both gave it a go but to no avail as their efforts were saved easily by the keepers.

England created another big chance towards the end of the first half with Pacheco running down the left channel. She managed a cutback that went past everyone except Devlin at the far post whose shot from ten yards was well saved by Picaud.

The last play of the first half came for France with a pinball-like action in the penalty area.

Katoto entered the penalty area, tried to dribble round a  few defenders, the ball was cleared to the edge of the penalty area where Boutaleb sent a missile towards the goal that was deflected wide by another French forward, Laurier.

The second half started in the same way it had ended.

France were on the attack from the off with Katoto having a run from the left and a finish that again went wide of the post. She would later find her shooting boots. Laurier then had a long range shot that went close to the top corner.

Another thirty-yard shot from Gavory followed up but Maciver was equal to it.

France were smelling blood and carried on attacking relentlessly. Ringenbach received the ball on the left, controlled it and volleyed but again, the ball went wide.

Being clinical is a problem all French women’s teams seem to encounter from the u16’s to the seniors.

England came back strongly with a big chance from a throw.

With the French back line falling asleep, Rouse was found unmarked on the left and tried to lob Picaud from twelve yards.

England started to dominate physically on the hour mark as France had played Germany two days earlier while England had an extra two days rest.

It became end-to-end stuff with both sides going for it to score what would be a probable winner with shots from Russo and Patten for England while Katoto twice was testing Maciver.

Then came the goal.

England won the ball in the middle third, made a quick transition with a ball to the left and a switch to the right wing where a through ball was sent to Stanway who finished from the edge of the penalty box.

1-0 England with five minutes to go.

It could have been the winner but France were determined to get an equaliser.

On one of the challenges, Arsenal’s Allen was competing with Katoto who is probably five inches taller and four pounds heavier than her and ended up getting injured unfortunately.

With no more substitues available beisdes the reserve goalie, England finished the game with 10 players and the added time went up to eight minutes due to this injury and a previous one in the second half.

France took advantage of their numeric superiority, attacking with every available players and from the left wing Katoto managed to find space, came inside the penalty box and sidefooted the ball past Maciver with 90+5 minutes played on the clock.

1-1 and France were now searching for a winner in the dying minutes. Laurier had another go from long range but her shot was deflected by Parker over the crossbar.

In the final seconds on 90+8, France’s De Almeida sent a missile from the left that crashed against the post but did not go in and the referee blew the final whistle with the score staying at 1-1.

A penalty shootout was organised and was won by England by 10 to 9.

All the 10 players took a penalty, including the goalkeepers who both scored and saved a couple.

It went to a second series and Maciver saved a French shot while Stanway scored the winning penalty.

Overall it was a very entertaining game and a good test in preparation for the elite round in April.

Georgia Allen came on as a sub but was unfortunately injured in a tackle, while forward Chloe Kelly did not come on as she was injured.