Let’s face it, Gunnersaurus is the coolest mascot in the Premier League, if not football.

But there’s no denying that he’s a dinosaur and, try as you might, it’s hard to ignore the glaringly obvious disconnect between club and mascot.

So how did Arsenal end up with a green dinosaur as their mascot?

Simple – he won a competition!

Arsenal ran a competition during the 1993/94 season for junior Gunners to design a mascot for the club and the design by Peter Lovell, then 11, was chosen as the winner:

Gunnersaurus was officially unveiled in 1994 and since then has attended Peter’s wedding, undertaken the Ice bucket challenge, partied on countless open-top bus parades, and generally entertained millions of people.

The news that Arsenal had let him go to cut costs while fans were not allowed to attend games was met with a widespread wail of grief around the globe with Shrek himself turning up to protest.

Mesut Ozil also offered to cover the dinosaur’s wages for as long as he remains at the club. Which wasn’t long.

For over 20 years now, fans have been baffled as to why we have a dinosaur as our club mascot. Well, wonder no more. 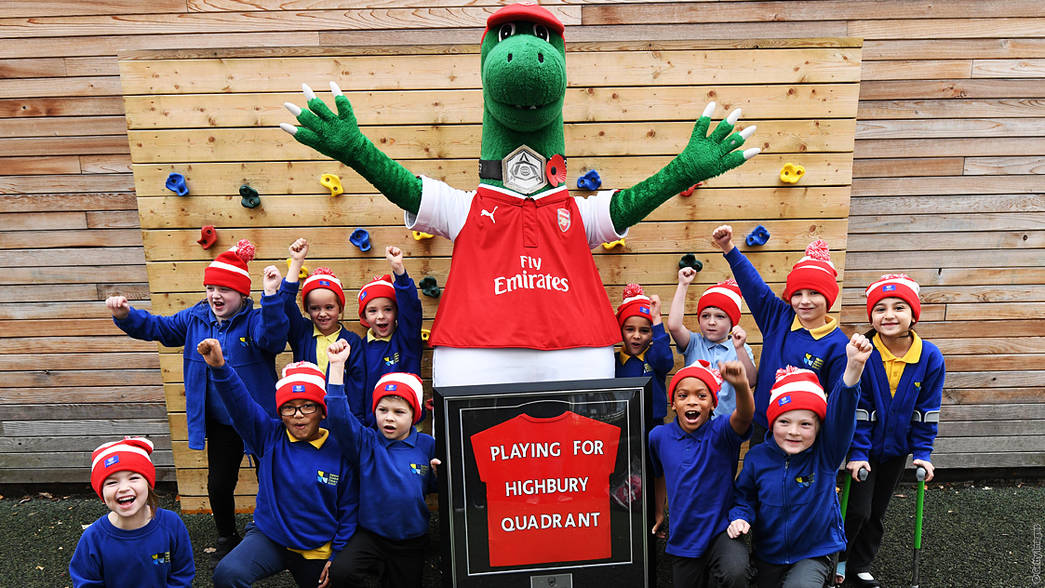 Gunnersaurus – that’s Gunnersaurus Rex to you, pal – was originally designed in the 1993/94 season in a competition held for Junior Gunners.

The, at the time,  artistic 11-year-old, Peter Lovell, was a lifelong Arsenal fan, as were his family, and the thought of designing the Gunner’s team mascot and seeing it parade around with the players was an opportunity too good to pass up.

He came up with the concept because he felt the Gunnersaurus embodied the ‘ferocity‘ the club stood for and, in his design, included that he wanted the mascot to be seven-to-eight feet tall and that the shirt should be changed as the team kit changed from season-to-season.

Lovell explains how he feels like the mascot is his son and one of the proudest moments he’s had as a ‘father‘ is watching Gunnersaurus Rex hug Cecs Fabregas, “I was nearly in tears,” he says.