What a difference Eddie makes…

Just 24 little hours, 24 hours earlier I had a very different introduction to this piece planned.

It was going to begin along the lines of a funeral service, yes, a funeral for our top four hopes, having been brutally crushed by, um, Southampton.

But I don’t have to write that piece now, not after Arsenal’s stunning and deserved 4-2 win at Stamford Bridge.

Before I forget to mention it, I do think it’s worth saying that Mikel Arteta has yet to taste defeat in his three games managed at the Bridge.

Given that up until last year we hadn’t recorded a win at Chelsea since Arteta was in our midfield in 2011, a draw and two wins are not to be sneezed at.

Two days after our bizarre defeat at Southampton – bizarre in that they created one chance and took it whilst we had several and contrived to miss them all – I was lucky enough to see my uncle for Stevie for the first time since August.

Having resolved to his boys, James & Josh, that he wasn’t going to talk about Arsenal with me, he couldn’t help himself and within minutes what had been a pleasant first full family gathering in months was subsumed into all of my uncle’s frustration about how the last three weeks have gone for us; no plan, no tactics, no progress, no centre forward and no hope.

Family is family and, of course, we got to a place of, if not mutual agreement, then safety reasonably quickly, but to my uncle the notion that we would go and beat the European champions on their own patch seemed utterly fanciful.

For my part, I’m not sure I expected us to win on Wednesday night.

Josh did, but I did think we would get a result.

Mikel Arteta was roundly laughed at for some of the things that he said after Southampton, but he was right. It wasn’t the most convincing attacking performance, but on the weight of chances – including good ones that both Smith Rowe and, in a game changing moment, Saka missed in the first half, we should have won on Saturday.

Which is a long way round of me saying that, whilst I understand the frustration everyone felt at dropping these nine points, I didn’t think things were as bad as everyone else seemed to on Saturday evening.

And here we are, a few days later and things are – very clearly – not as bad as everyone thought they were.

All we had to do was give Eddie Nketiah, helpfully doing his Thierry Henry imitation for the opener, before a very Ian Wright finish for the second half winner, a go.

As I said last week, I don’t know if Nketiah is the long term answer for us, but he can be an answer now.

Let’s put it this way, could Alex Lacazette have scored that first goal? I think we all know Laca would have fallen over after 20 yards.

Nketiah till the end of the season, please!

Also, very helpful was Emile Smith Rowe rediscovering his shooting boots after a relatively quiet time recently. His unerring, first time finish from the edge of the box was a fitting end to a breathtaking Arsenal move – it also looked ridiculously casual. He’s making a happy knack of goals in SW6.

Of course, Arsenal wouldn’t be Arsenal if there weren’t a few chills to go with the spills.

Is Aaron Ramsdale fated to never save another shot again? Timo Werner’s incredibly weak effort luckily spinning past him off Granit Xhaka just minutes after we went ahead.

Lead restored, Ben White decides he fancies a free kick so takes a nap on the pitch and Cesar Azpilicueta stabs home another equaliser.

Azpilicueta would play a key role in the game’s denouement. Arsenal had already passed up a couple of very good opportunities on the break (thanks, Cedric!) when the Chelsea captain, somewhat unwisely, decided he fancied taking Starboy for a wrestle.

Bukayo accepted his embrace and let Azpilicueta take him to the mat.

Even Jon Moss couldn’t miss that.

Given the final act of last summer’s Euro final, he must have wondered. Were there any thoughts in Saka’s head about letting someone else take the spot kick? Didn’t look like it, he grabbed the ball as Azpilicueta raged and twisted as uselessly as a windcheater in a tornado.

When the men in white coats finally came to sedate the Chelsea man, Saka rifled his redemption penalty into the bottom corner. Game, set, match and Arsenal level on points with Spurs, albeit with a lot of goals to make up and six games to go.

I said on Twitter, Saka is in the process of fast becoming my favourite ever Arsenal player, which you may see as a little premature, but there is something about this kid’s blend of skill, strength and sheer courage that just makes my heart sing.

Like Ian Wright before him (we’ll get to him), I think Saka plays the game the way any of us would want to and he’s only 20.

A word for the man who apparently has no plan.

The selections of Elneny and Holding would have seen a little bit of consternation across the fanbase, but they were pretty solid whilst the deployment of Saka as a winger/wingback as the situation dictated was a little bit genius and perhaps a little evidence that Arteta is more flexible in his thinking than we give him credit for.

And if we don’t one day have a statue outside the ground marking this Basil Fawltyesque moment, I will be very, very sad indeed. 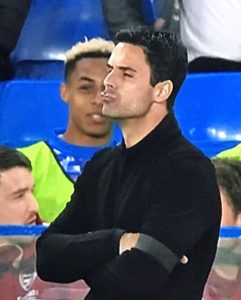 Final thought from me.

Ian Wright has now been inducted into the Premier League Hall of Fame.

Anyone who follows me on Twitter, has listened to me talk about Wrighty on the podcast, or even read some of my stuff here will know the absolute love and reverence I have for the South London goal machine.

Of course, I’m not alone in that – anyone who watched Arsenal in the 90’s will remember a time when it felt like Wrighty was, more or less, the only reason to watch.

The guy was an absolute genius and so inventive in his methods of tormenting and humiliating opposition defences and goalkeepers, it was lucky he was ours, otherwise I’d probably have hated him.

Nearly 30 years later, his goal against Everton, which I was lucky enough to witness from the back of the North Bank Lower still stands as the gold standard against which all other great Arsenal goals will be judged.

Thanks for all the memories, legend.