He might now claim that he was merely poking a little fun, but ITV’s Sam Matterface unleashed a tidal wave of mockery for comparing Mikel Arteta and Arsenal getting a game postponed, within the rules, to the Prime Minister and his Tory mates breaking lockdown rules and lying about it while people were kept from seeing their loved ones.

It seems a weird joke to make for many reasons, not least the disdain it shows for all those who will always grieve the final moments with a loved one that were stolen, while those in charge partied continuously.

Were there really no other examples he could have used for his ‘joke’? 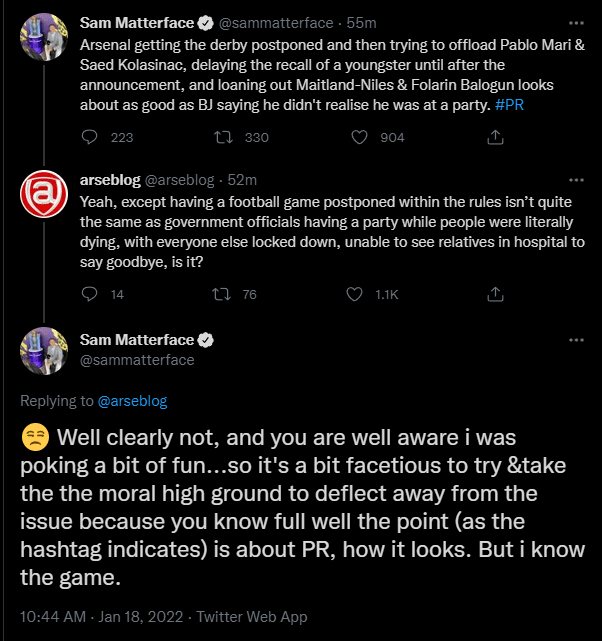 The catalyst for Matterface’s tweet was the news that Arsenal are set to loan out Pablo Mari, a player who hasn’t played since September and who disappeared for months without anybody noticing.

Matterface probably noticed that loan, which still hasn’t happened at the time of writing, because it was splashed all over the Mirror’s back page on Tuesday:

It seems you aren’t allowed to use the transfer window to loan out players if you’ve had a game postponed, which will come as a surprise to the clubs who have asked for a number of postponements, who carry on loaning out players without criticism.

Matterface then went on to give an excellent example of how to prolong a Twitter onslaught, by trying to defend himself repeatedly instead of just shutting up and staying quiet.

It would have died down much quicker that way, but now it seems he’s getting a little feel for what it’s been like being an Arsenal fan recently…

Of those players, I believe at least Azeez, John-Jules, and Dinzeyi would qualify as appropriately experienced players for the PL rules. Osei-Tutu as well, but he’s injured.

So if anything, Arsenal’s transfer business has made it harder to postpone games.

The Mail on Sunday were so incensed that Arsenal asked to have their game against Tottenham postponed that they compiled the most farcical graphic you are likely to see this year.

Not since the Mail’s Adam Crafton picked an all-Tottenham combined XI ahead of a North London derby, that they then lost, have the Mail produced a graphic as stupid as the one they had in the Mail on Sunday this weekend.

In a crowded field of media indignation and outrage over the rules applying to Arsenal like they do to everybody else, they stand head and shoulders above their rivals.

Despite not caring when 20 other games were postponed, this has been a step too far for many journalists and pundits.

As a result, the Sunday papers were filled with anger at Arsenal.

All clubs want to game the system but we're only going to cry about it when Arsenal do it… pic.twitter.com/8UbsgwWtpq

In amongst all that, the Mail on Sunday produced a starting XI they believe Arsenal could have fielded against Tottenham at the Toilet Bowl Stadium.

They have given each player a value based on what the club paid for them, rather than what they are worth now with one goal – to pretend Arsenal had a more valuable lineup available than Spurs.

That’s before you even get to them putting Pablo Mari at right fullback and Charlie Patino on the wing and, of course, they don’t mention substitutes, because Arsenal would not have been able to name any.

As a result, Harry Kane is valued at the same amount as Charlie Patino – £0.

I took the time to look at the player’s actual values and, you won’t be surprised, it tells a very different story.

It’s no wonder they opted to use the price clubs paid rather than the current market value, as Harry Kane is worth half the entire Arsenal team listed on his own.