The Africa Cup of Nations tournament could be set for an indefinite postponement, according to multiple reports this week.

Egyptian journalist Ismael Mahmoud and Mirror reporter David Lynch both tweeted on Wednesday morning that CAF are expected to announce a postponement of the upcoming Africa Cup of Nations imminently.

Mahmoud wrote that CAF are holding discussions, and will most likely postpone the tournament, but they could also hold it without players from Europe.

The European Clubs Association wrote a letter to FIFA to express concerns over the well-being of players given the current Covid-19 situation and then followed that up with another to CAF.

That letter stated, “The pandemic and its associated implications raised three fundamental concerns for clubs when it comes to the release of players to national teams. First and foremost, the clubs’ duty to ensure each and every player’s wellbeing is properly protected.

“Second, that clubs are not forced to be without players for club competition matches.

“Third, that all players resume their activities with their clubs following national duty in a timely fashion, as per the applicable rules.

“With regards to applicable protocols, as far as we are aware, CAF has not yet made available a suitable protocol for the tournament, in the absence of which clubs will not be able to release players.”

But not everyone is on the same page.

Saddick Adams reports that CAF have quashed the rumours, with the CAF Head of Media Relations and Operations describing the reports as “fake news”.

On Friday, the Daily Mail reported that Premier League clubs believe the tournament will be postponed due to the escalation that has taken place around the world in just the last few days as omicron takes hold.

The Sportsmail understands that ‘despite denials from the Confederation of African Football (CAF), the tournament is in serious danger. The spread of the Omicron variant has left European clubs nervous about releasing players.’ 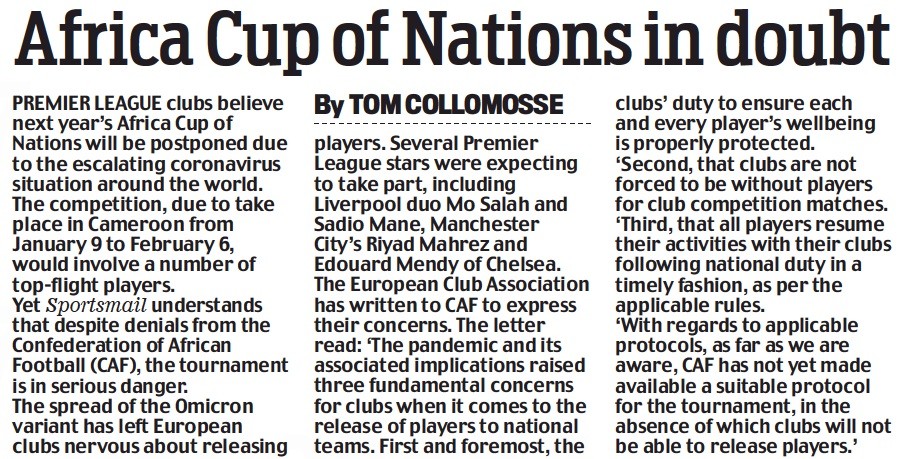 The potential postponement obviously has an impact on Arsenal, who are set to lose four players to the tournament in a few games’ time.

The suggestion is that they’ll have to leave on December 27th, though there was also some talk of a January 3rd release date.

Here’s Arsenal’s schedule over the relevant period, with unconfirmed fixtures in italics: