Harry Kane’s hilarious double-assist to both start the move that led to Arsenal’s third goal and his sliding tackle to provide the final assist has resulted in a few of the papers laughing at him, along with millions of Arsenal fans.

It often seems like many of the mainstream papers take as many shots at Arsenal as they can manage, while treating Spurs with kid gloves.

Not so after their humiliation at the Emirates on Sunday.

Arsenal had this derby game won within the first 34 minutes thanks to football that wouldn’t have looked out of place in Arsene Wenger’s heyday.

But the funniest of all the goals was when former Arsenal youngster, Harry ‘one of our own’ Kane decided to try and rectify his own mistake after standing on the ball at the edge of Arsenal’s box.

Daniel Harris in the Guardian, wrote:

“Kane tripped up by karma police

“With 34 minutes gone, Harry Kane tripped over the ball and tanked back after it, catching up with play just in time to feed Bukayo Saka for Arsenal’s third goal, thereby enshrining one of the great derby humiliations.

“This was nothing more than Kane deserved because while there’s something wrong about someone being forced to work somewhere against their will, it was he who signed a six-year contract with no release clause, and he who mistakenly thought an act of impotent petulance would faze the game’s most stubborn nihilist.

“Consequently it was hard not to enjoy the karma police catching up with him. Doubtless he’ll rebound from the disappointment – he’s too good not to – but he was once able to refocus games of this ilk to become all about him, a quality that might just have escaped him for good.

“Spurs may come to regret keeping him as much as he already regrets staying with them.”

But it wasn’t just the Guardian.

The Daily Mail were at it, too, and it’s not often you see those two papers presenting the same point:

Matt Barlow wrote, “The third goal, gleefully tucked away by Bukayo Saka, will come to define this derby and live long in Arsenal folklore.

“It came with a little bit of everything for the home fans to enjoy from Harry Kane’s misfortune and his unwitting assist for Saka — the new darling of the Emirates — who celebrated with a little jig, sure to go down a storm with the club’s social media department in the week ahead.

“For Tottenham, Saka’s goal seemed to sum up a great unravelling; a feeling that nothing is going to plan and that even their best player can do no right for doing wrong.

“It was a slick counter-attack. And it had started with Kane on the ball, trying to work a yard of space. But he stumbled, lost control and enabled Thomas Partey to nip in and launch the break.

“Kane, ever willing, chased back. Seconds later, he was in his own penalty box, making a sliding tackle to foil Saka, but while he cut out the cross, the ball spilled kindly for the Arsenal youngster, to beat Hugo Lloris.

“Cue the dance routine with Gabriel and Partey.

“Kane toiled away, still in search of his first Premier League goal of the season, still unable to find the spark, even against the old enemy. No one has scored more than his 11 goals in this fixture and Nuno must have arrived dearly hoping that, after a midweek goal in the Carabao Cup, his main source could find the target and ignite one of those famous Kane goal clusters.”

It’s worth noting at this point that Kane has only scored one goal from open play at the Emirates in his career, and that was in 2015.

The Mirror, which does tend to be a bit more pro-Arsenal on occasion, had this as their back page: 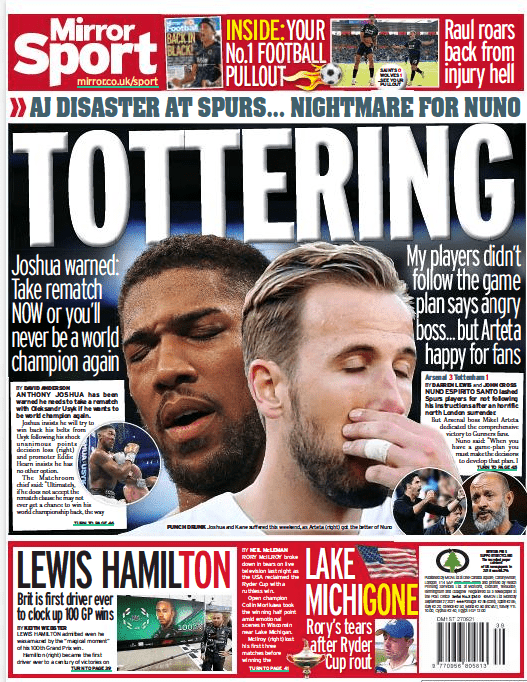 While this is just beautiful:

Their match coverage wasn’t too bad to look at, either:

The S*n, Telegraph, Star and Express, meanwhile, didn’t seem to find it anywhere near hilarious.