Jack Wilshere could be about to move to Australia as the former Arsenal star looks for a new club.

Although Mikel Arteta has opened the door for an Arsenal return for Jack Wilshere, and talks between the two parties have begun, that was only ever meant as means to keep his fitness up.

Also on this page:

Without a club since the end of last season when he was released by Bournemouth, Wilshere was set to move to Italy to play for Como but post-Brexit issues stopped that from happening.

Now, his advisor, Neil Fewings, has held talks with New South Wales side Newcastle Jets in the A-League after they made an approach.

Wigan Athletic, in League One, and an ‘unnamed Middle Eastern club’ are also said to be interested.

Jack Wilshere on his Arsenal regret

Wilshere has also admitted that he probably shouldn’t have left Arsenal but I’m not overly sure that would have been his choice.

Speaking to the Guardian in March, Wilshere said, “It’s gone now, that feeling that I could still be there. I decided to leave, whether it was right or wrong. At the time it felt right, and probably in hindsight it wasn’t right but it is what it is.

“I am like any Arsenal fan now – and it is difficult to watch them because sometimes they make it difficult to watch – but I feel like they are on the right path with Mikel [Arteta] as manager. You can really see what they are trying to do. If they could find a little bit more consistency, I think they will get a lot of success under him because they have the manager’s respect and he has the right philosophy. It is coming, I think, slowly.”

Wilshere signed for West Ham on a free transfer when it was made clear to him that he would not be a starter at Arsenal. Manuel Pellegrini talked a reluctant West Ham board into giving the midfielder a three-year deal as both a show of faith in the player and the manager, a move that turned out to be misguided.

Speaking to Arsenal’s In Lockdown podcast in May 2020, Wilshere discussed how his departure from the club came about. Though he wanted to stay, it was clear he didn’t have much of a future at the club post-Arsene Wenger. 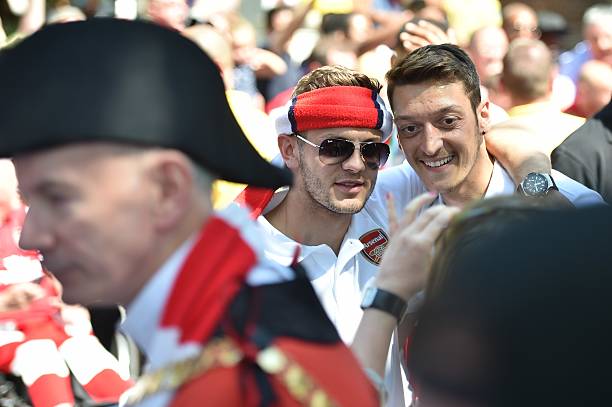 “I felt like it went on forever because the (contract) discussions probably started in February and then we got to a point where I was going to sign it,” Wilshere said.

“I wanted to stay at the club, I love the club, I knew everyone at the club, I felt like it was my family and then Arsene left so that dragged on,” Wilshere continued. “They didn’t announce Emery for a while and the club was going in a different direction.

“I had conversations with my dad, my family, my wife, my agent around that time about waiting to see who came in [as manager]. To see if he liked me because of the way the contract was set up.

“It seemed like it went on forever and then as soon as Emery said to me, ‘Look, you’re not in my starting XI’, I was like, ‘Okay, right, I need to leave’. It was very difficult as I said, it felt like Arsenal was my family.”

When Wilshere talks about ‘the way the contract (offer) was set up’, it’s pretty easy to guess what he means. Reports at the time suggested Arsenal were actually planning to reduce the midfielder’s wages, adding in larger performance-based bonuses.

If he signed on and played regularly, he’d end up earning more money than he did before. If he signed the deal and then sat on the bench or the treatment table, he’d earn a lot less.

You can understand why Arsenal made that offer, given Wilshere’s history. You can also see why it would put him off once Emery confirmed he wasn’t a starter.

Even if Wilshere had stayed fit, he probably wouldn’t have played enough at Arsenal to avoid a pay cut. Then, he’d be earning and playing less than he could elsewhere. Hence the move. A totally logical decision and one that was probably for the best for all involved.

Across two seasons with the Hammers, Jack played just 837 minutes in 19 matches with one goal, one assist and two yellows. He played the full 90 in his first three games for West Ham after signing for them and then never again in any competition except the league cup, where he did it once.

Injuries, on the other hand, kept him out of 53 games, tending to come to fitness as seasons wound down.

Ankle injuries have cost Wilshere at least 102 games across his career and 31 at West Ham. When you add in his stress fractures, fatigue fractures, hairline fractures, knee injuries and groin problems, you get to a total of 208 games missed through injury since he first burst onto the scene.

Wilshere played a total of 198 times for Arsenal.

There is, as we have always known, a tremendous player inside Jack Wilshere. From the days when he tormented Pep Guardiola and Barcelona as a teenager until now, we all know what a talent he is.

Sadly, that skill has been delivered to earth in a body not meant for top-level sports.

There is, of course, always the option of him returning one day in a coaching capacity.

As Arsenal sacked Unai Emery, the Mirror released an exclusive with Jack Wilshere who revealed he’s taking his first steps towards becoming a coach.

A long time ago when he was just establishing himself in the Arsenal first time, a friend of someone who writes for this site said that Jack Wilshere’s ankles would never let him play football at the top level. He knew him, or people close to him, I can’t remember which now. It seemed absurd at the time, when Wilshere had only really begun to suffer problems, but more than 10 years on, it looks like he was right on the money.

As such, it’s perhaps no surprise that Wilshere’s attention started to turn towards coaching in 2019.

“When I talk about what I want to do after my playing career, what interests me is the development of kids, more than management,” he told the Mirror. “I like coaching and giving advice to kids.

“It is rewarding. I know Steven Gerrard started working with Liverpool’s youth team, used that as a stepping stone and some players are different. Frank Lampard is at the top already. I see myself going into coaching kids, going into an academy and see if I enjoy it.

“When you go out of a playing career for 15 years, there’s a lot of pressure, travelling away and it would be nice to spend a bit more time at home with my family but I definitely want to do some kind of coaching.

“I look at Lampard and Gerrard, people like that and I think: ‘wow – fair play to you.’

“They’ve gone into a pressure situation where they are coaching, they are working but they also have to win games and that’s even more pressure.

“There’s maybe a little less pressure working with kids where winning is not everything, your goal is to develop players, get them ready for the next step. That’s what interests me first, but then things change.

“Lampard did great at Derby but probably didn’t expect to be at Chelsea this soon and he’s doing unbelievably well. Things change and things come up, you never know.

“I’ve got a few years left playing, but it will be interesting to speak to Steve or Frank and see how young or how early they were thinking about being a coach, they probably were about my age because it takes a while to get your qualifications.

“I want to keep it ticking over with the Elites, getting more experience with your coaching because you’re then ready when you finish.”