Darren Berry, author of Clickbait: Life As a Modern Football Fan – a mildly painful chronicle of Unai Emery’s one full season in charge of the mighty Arsenal, has written another book. 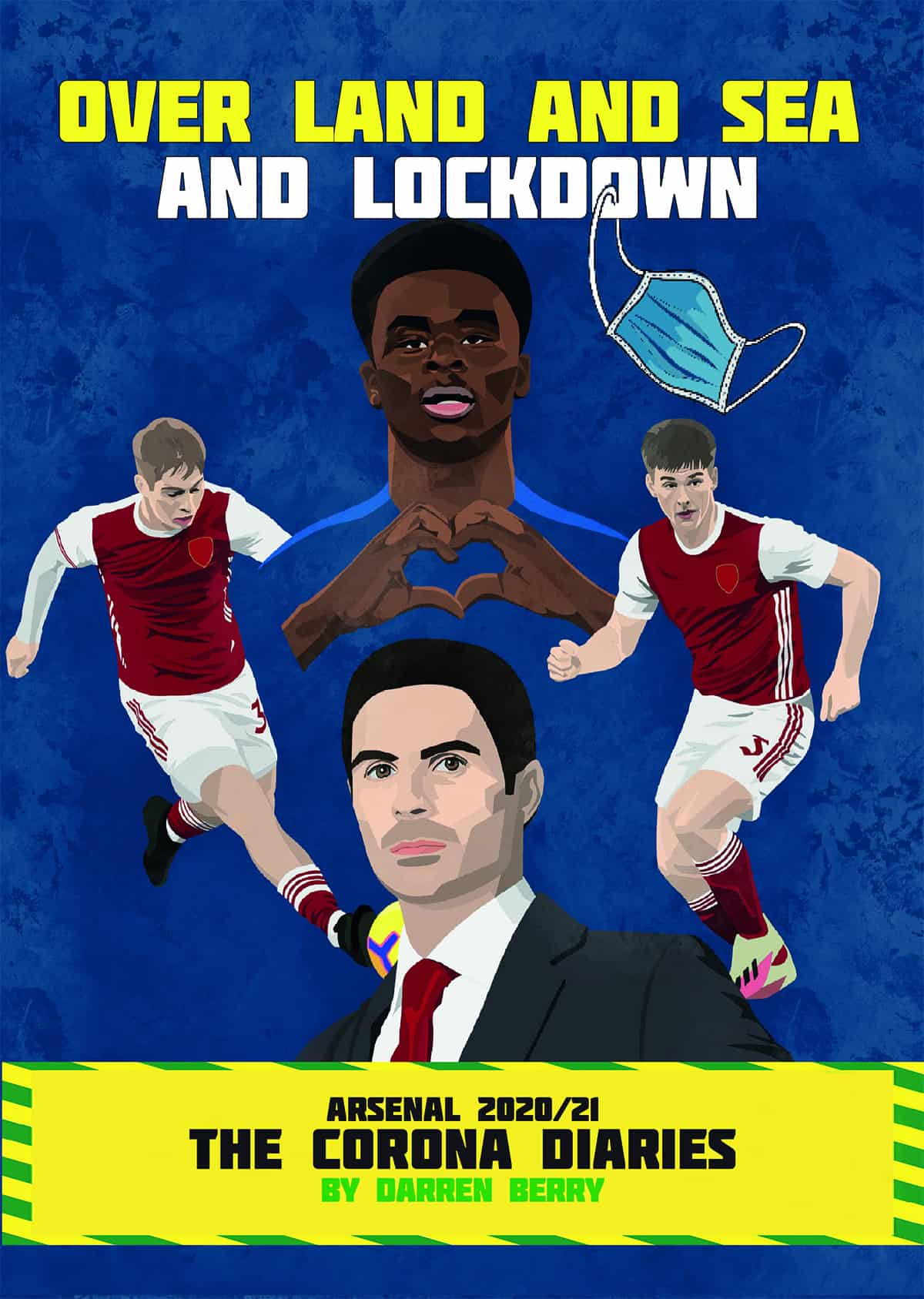 It’s called “Over Land And Sea (And Lockdown)” and tells the story of one Arsenal fan’s journey through the 2020/21 season, all while coping, as the rest of us were, with a global pandemic.

Now, there are a few things you need to know before proceeding with this review:

1) Darren’s a mate, so there may be an element of bias in what you are about to read.

2) I actually appear in the book towards its end. I’m not bragging, I’m just telling you so that when you get to the relevant bit (an email to Arsenal, following the now infamous Super League announcement), you don’t get all “Wait a minute…!”

3) Darren sent me a copy of this book (which I had already pre-ordered) to read and review so I could download to my Kindle. I thought that would be easy. It wasn’t, I told Darren I’d never fully tell him about it, and indeed when we talked to Darren for a recent Daily Cannon podcast, the subject never came up.

Let me tell you now, absolute nightmare! For some reason, I had to encrypt the relevant drive, which obviously then blocked me from being able to download anything. So I had to decrypt the drive I had just been asked to encrypt. I didn’t figure this bit out for hours, the wise words of my 98 year old grandmother ringing in my head, “No good deed goes unpunished…”*

Buy Over Land And Sea (And Lockdown) here

However, as Darren also says in the book, once I finally got it downloaded, “There’s no bigger inconvenience than being dead.” In many ways, I think this is the key sentence of the book. A book written as the season went down, no going back, no edits to make Darren look clever in the aftermath. As frustrating as the season becomes, Darren never loses sight of the fact that life could be much, much worse. Perhaps, to quote a famous piece of commentary from much better times, it is “scant consolation”, but it is a consolation.

How bad was this Arsenal season? Rubbish, absolute rubbish, but at least I’m not dead…

So, why would you want to read this book, then? A book written from the heart of the worst public health crisis – “public health crisis” doesn’t seem quite adequate does it? In the spirit of the book I’m reviewing, I’m leaving it in. A book written about Arsenal’s worst league season since 1994/95; a season which required Arsenal to win all five of their last league games just to drag us to the not so lofty heights of 8th in the Premier League table?

The answer is that this book, part season diary, part Covid diary, part mental health check (I totally agree with Darren, turning your Twitter off after a bad result or performance is a very sensible idea, kids) is all heart. It’s honest and funny and, in keeping with the nature of Arsenal’s season and indeed the government’s way of dealing with this global pandemic, it is a proper rollercoaster. And Darren guides the reader round it like a seasoned pro, absolutely nailing the conversational tone of this book. It’s also laugh out loud funny. For me, there is at least one zinger a page – or at least, it feels like it.

Your author really captures the slide into despair that we all experienced on what felt like those endless late autumn Sunday evening kicks off when some team from the Midlands would come to the Emirates and smuggle their 3 points away from a listless Arsenal; then the delight of the Christmas miracle which was the Emile Smith Rowenaissance (that’s mine, not his – no wonder he is the published author) and then the uncomprehending rage of watching us get screwed over time and again by VAR decisions that, ultimately, cost us a place in Europe next season.

If anything sums this book up (and indeed the nature of fandom), it’s the Slavia Prague tie and some words on Alex Lacazette:

“FUCKING HELL!!! LOOK AT HIM!!! HE’S RUNNING BACKWARDS!!!! He did reach the area after what felt like a week, but somehow managed to hit probably the hardest part of the crossbar it was possible to hit.”

“The evening in Prague began in spinetingling fashion, the sight of the Arsenal players taking the knee in front of the Prague players – with Lacazette leading from the front, staring them down – will live long in the memory…. Lacazette sealed an outstanding performance with our fourth on 71 minutes.”

On reflection, maybe this just sums up the schizophrenia of the season we’ve all just experienced.

There are two things you will definitely take away from this book once you’ve read it. One is that Darren is a supporter in the true sense of the word. He’s not gobbing off for Youtube hits, this is a man who really loves his football club and will defend them to the hilt (I can vouch for this) and any criticisms made of the team are made in the heat of the moment and almost always reflected back on. He’s not afraid to hold his hands up if he’s got something wrong.

The second thing is that Darren really loves going to the pub. Obviously, that’s not been an experience any of us have found easy to come by for what feels like about 500 years now. However, if this book has a happy ending then, as Arsenal weren’t kind enough to provide one, it comes when Darren meets his missus in the Famous Cock on the 18th May, one day after lockdown restrictions are eased enough for this to happen.

Having experienced and, of course done my own version of, Darren’s journey through lockdown, the frustration of things being eased and then reversed, I found the sense of optimism and excitement at the light at the end of the tunnel quite moving. Typing this on my final day of self isolation, having had to spend my birthday self isolating having been pinged by the app, I just find it quite ironic. But that’s not Darren’s fault – and as he said to me last week, “On the plus side, plenty of time for that book review”

And, of course, “there’s no bigger inconvenience than being dead.”

But, seeing as you aren’t dead, go buy a copy of Over Land And Sea (And Lockdown) now and help support a fellow Gooner!

*Maybe you didn’t need to know this, I just needed to get it off my chest