You won’t find many Arsenal fans who think that 20/21 was a good season but was it really that bad and was it worse than Tottenham’s season?

Back in November, people were talking about Tottenham being in the title race and Arsenal as relegation candidates. That Spurs finished in seventh place, scraping into the Europa League Conference, just one point ahead of Arsenal, widely regarded to be having their worst season in decades, seems to have mostly gone uncommented on.

One point between title contenders and relegation fodder, yet Arsenal are the ones who had the worse season?

Tottenham sacked Jose Mourinho and appointed Ryan Mason, all of which seems to have given them a by-ball when it comes to criticism.

Yet again, Spurs failed to win anything, taking their trophy drought to 13 years, 30 if you want to talk trophies that matter.

They were out of Europe long before Arsenal, yet, according to the Daily Telegraph, Arsenal, who were the second best team in the league over the final 24 games (63% of the league season) and won their last five in a row, get a D while Spurs get a C:

The Daily Mail were similarly harsh on Arsenal while mostly ignoring Tottenham. While a few Arsenal youngsters were picked out as breakthrough stars, two other writers talked about the disaster that is Arsenal behind the scenes. None said anything about Tottenham: 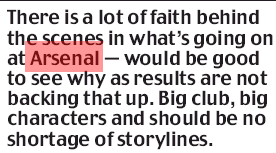