Arsenal are the best top side in the Premier League when it comes to giving chances to under-21 players but they still lag behind Wolves and Sheffield United.

It is no surprise to see Arsenal near the top of the Premier League charts when it comes to giving minutes to young players.

This season, Mikel Arteta has handed 11.3% of minutes to players who were under 21 on the day of the match.

Contrast that with Jose Mourinho up the road at Tottenham who has given 0% of his minutes to any youngsters or even Manchester United, famed for their youth policy, who have only given 4.7%.

But the Premier League trails some way behind other teams across Europe.

Borussia Dortmund, for instance, has given a whopping 28.5% of their minutes to u21 players, putting them clear at the top, some distance above OGC Nice with 24.3%.

In the Premier League, Wolves are the best side if you are a youngster in England. 16.2% of their minutes have gone to u21 players while Sheffield United are second with 12.4%.

% of minutes given to u21 players: 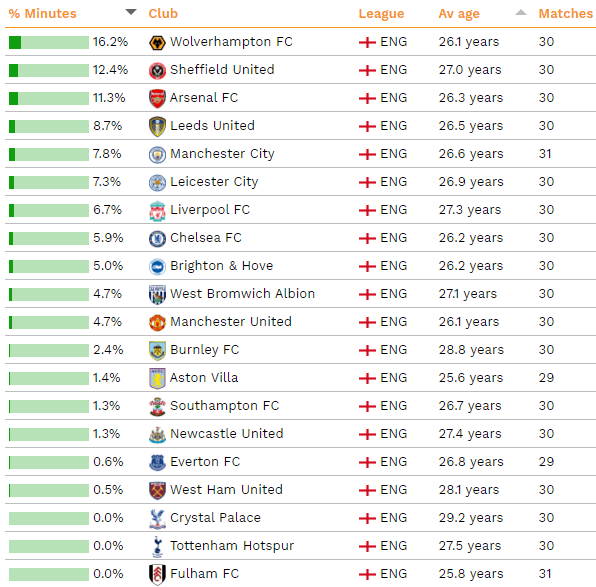 Reading complete loan deal for Arsenal 19-year-old but will he play?