Arsenal’s goal this season was to qualify for the Champions League but with a gap of nine points to Chelsea in fourth, is it doable with the fixtures that remain?

I’m not going to look at what teams the other sides in the race of fourth place have coming up. You and I both know they don’t matter in the slightest if Arsenal can’t be depended on to collect points from their own games.

With 30 still on the table, how many are Arsenal likely to collect? You place your bets by checking out comeon.

If you’d said at the start of the season that Arsenal would be within four points of Liverpool with 10 to play, we’d have all thought one of two things had happened: Mikel Arteta had worked miracles or that you were on drugs.

Turns out, neither of those would have been correct because we are indeed just four points behind Liverpool with 10 games to play but that’s because they’ve been almost as rubbish as us.

Going into this game, Arsenal actually have the better form, having won two and drawn two of their last five. Liverpool have lost three of theirs, but who knows what state players will be in when they return after jetting around the world in the middle of a pandemic.

This game is there for the winning for Arsenal, if they want it that is.

Sheffield United are rooted to the bottom of the table and are Championship-bound but such trifling matters have never concerned Arsenal before.

The Blades have registered just four league wins all season and Arsenal huffed their way past them in the home game but it’s a fact that you simply cannot yet trust this Arsenal team against any side. They have the ability to make the most spectacular errors, almost for the fun of it.

It isn’t fun. They should stop it.

Ah, Fulham, how you fooled us into thinking Arsenal were good when you went down 3-0 on the opening day.

Fulham have beaten Arsenal eight times in 117 years and Arsenal have won the last six with a combined goal difference of +13. Clearly, my supreme confidence for this one means Arsenal will probably blow it.

Everton currently sit behind their Merseyside rivals on goal difference, but with a game in hand. The arrival of Carlo Ancelotti has shown very clearly what an experienced manager can bring to the table from the get-go and there is no denying that, even with the players currently at Arsenal, Ancelotti would have seen us further up the table.

But he isn’t necessarily one for building a future and would have cost much more than the rookie we hired in Arteta.

That being said, for all Arsenal’s troubles this season and how much Everton have been lauded, we are only four points behind (albeit they have that game in hand). Assuming they win that, a seven-point gap isn’t that huge when you compare the experience of both managers.

None of this tells us if Arsenal are likely to collect the points against Everton when the sides meet next month at the Emirates.

Arsenal have beaten Everton exactly the same number of times they have failed to beat them (108 wins, 62 defeats, 46 draws) but in recent seasons the Gunners have not fared well. Arsenal have won only one of the last four against the Toffees, although they haven’t lost at home to them since January 1996 – 25 years. 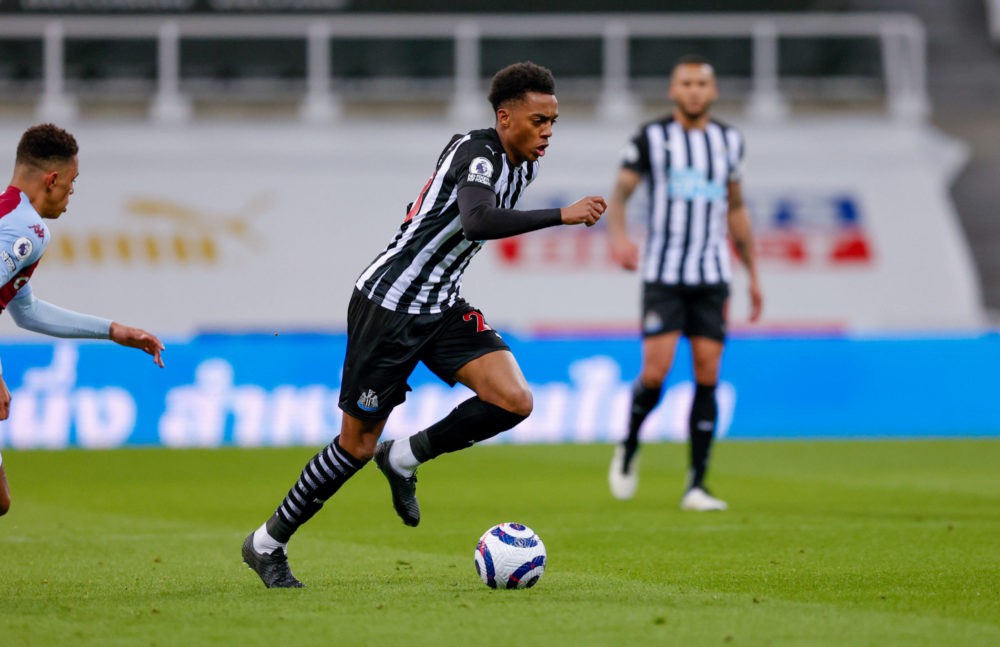 Newcastle United midfielder Joe Willock, on loan from Arsenal, during the Premier League match between Newcastle United and Aston Villa at St. James’ Park, Newcastle, England on 12 March 2021. Copyright: Simon DaviesNewcastle are currently hovering around the drop zone, two points above Fulham in 18th place, although the Cottagers have played a game more.

On paper, this game should be straightforward for Arsenal but, as we know, games aren’t played on paper and when they step onto the pitch, Arsenal have the ability to blow it against any side.

The Magpies have won just two games in 2021 and Arsenal won their home fixture 3-0 thanks to goals from Pierre-Emerick Aubameyang (2) and Bukayo Saka.

If Arsenal aren’t able to collect all three points in this game, they have no business wanting to be in the Champions League.

The Baggies are in 19th place with just three wins all season and Arsenal bested them 4-0 in their first meeting this season.

A home fixture as close to a banker as you can get.

Arsenal’s win over Chelsea on Boxing Day might well have been the result that saved Mikel Arteta’s job with Arsenal on a downward spiral, failing to win any of their previous seven (Unai Emery was sacked after seven without a win and Mikel Arteta has already lost as many matches as Emery in fewer games).

That was against Frank Lampard’s Chelsea, however. Thomas Tuchel’s Chelsea are a different proposition altogether.

Tuchel arrived in London and made an instant impact on Chelsea’s fortunes, averaging 2.43 points. From his 14 games in charge, Chelsea have conceded just two goals and have won 10. That being said, in the 14 games since that Boxing Day match, Arsenal have only lost three (feels more, doesn’t it?) and have won seven. They have, however, conceded 10.

Although Arsenal won their last two against Chelsea, anything from this match must be seen as bonus points, especially as it is at Stamford Bridge where Arsenal haven’t won since 2011 and have only won four times since 2000.

Arsenal have never faced Thomas Tuchel in any competition.

Palace sit five points below Arsenal with only two fewer wins under their belt than Arteta’s side and Arsenal have not won any of their last five against the Eagles (four draws, one defeat).

It’s an embarrassing record, especially when you consider Arsenal had won 19 of the 25 before that.

A team like Arsenal should be able to count on points from a game like this but we simply cannot.

10 points behind Arsenal and four above the drop, a lot will depend on what rests on the final league game of the season for both these sides. If Brighton have secured safety for another season and Arsenal are in need of points to secure European football, that will certainly give Arsenal the edge but, like most of Arsenal’s remaining matches, nothing can be taken for granted.

From the run in, seven of Arsenal’s 10 remaining Premier League fixtures are against sides below them and involve all of the teams currently placed 16th, 17th, 18th, 19th and 20th.

That should swing things in the Gunner’s favour for an unlikely Champions League return, but the key word there is ‘unlikely’. Few would consider this side Champions League standard, no matter how strongly they finish the season.

Not that I’ll complain about that should we somehow manage to do it.

How many times have Arsenal finished fourth (4th)?

Arsenal have not finished in fourth place in the last seven years. The last season Arsene Wenger guided Arsenal to 4th place was 13/14 and he followed that with a 3rd, a 2nd before the slide really began. It was 5th, 6th, 5th, 8th, and 9th after that, with this season as yet still undetermined.

In total, since the 1893/94 season, Arsenal have finished fourth 15 times, although not all those were in the top flight.

Since winning promotion in 1904, Arsenal have finished 4th 13 times, although they did not finish fourth for the first time until the 1968/69 season.

When were Arsenal last in the Champions League?

Arsenal last played in the Champions League in the 2017/18 season when they went out at the round of 16 for the seventh consecutive season.

Arsenal have not gone past that round since 2009/10 when they made the quarter-final.

Arsenal have just one defeat so far in this year’s competition and the last time they lost as few games as that was in the 2005/06 season when the only match they lost was the Champions League final.

That being said, they only lost one game in the Champions League in the season before and went out in the round of 16.