Huddersfield Town have signed former Arsenal striker Yaya Sanogo, who was available on a free transfer.

Earlier this week, Pete O’Rourke reported that Huddersfield Town had agreed to sign Yaya Sanogo, who has been out of contract ever since Toulouse released him at the start of July 2020.

Yorkshire Live previously reported that Sanogo was a player that Huddersfield officials had discussed in their pursuit of forward reinforcements, given the injury problems in their squad. They’d also taken a serious look at Ravel Morrison, also out of contract.

At that point, a deal for Yaya Sanogo was viewed as more complicated, purely because they’d need to get him a work permit. As a player who most recently played in the French second division and hasn’t been with a club for many months, that wasn’t straightforward but it seems as though they have managed to sort it out.

“We’re happy to welcome Yaya to the Club this week,” a statement on the Huddersfield Town site said.

“It’s great that he has experience of playing in England, including the Championship, as it should allow him to hit the ground running. It was also clear from our discussions with him that he has excellent command of the language, and that he’s a positive person.

“He’s been at some big clubs in his career and comes having most recently played in a top European league. We were looking for a player who can have a real impact for us this season and we believe he fits the bill.”

Sanogo had previously been linked with moves to Middlesbrough and an Egyptian second-division side without either of those deals going through.

Yaya Sanogo spent four seasons with Arsenal earlier in his career, though large portions of that time were on loan to Crystal Palace, Ajax, and Charlton Athletic.

In North London, he made 20 competitive appearances, scoring one goal and assisting two. He won the FA Cup and the Community Shield, appearing in every round of the cup from the Round-of-16 match against Liverpool to the final against Hull City.

The last we really heard about Sanogo in England was in September 2020 when he was said to be close to a move to Middlesbrough before failing his medical after self-isolating in a hotel for two weeks before.

Since leaving Arsenal in 2017, Sanogo has played 72 times, scoring 16 and assisting four.

Zamalek SC were then said to be close to landing Sanogo as their marquee signing in January in a bid to soothe fans should they lose “their most prized asset Mostafa Mohamed with Saint-Etienne said to be edging ahead of Galatasary for his signature,” according to a report in December

Mostafa Mohamed signed for Galatasaray on loan on deadline day for a fee of just under £1.5m. That means there was still an opening there for Sanogo and, as he’s a free agent, Zamalek could have signed him even though the window had closed. No deal was found, however.

Sanogo turned 28 at the end of January and is still valued at around £1.8m.

Yaya Sanogo says that when he signed for Arsenal he knew he would be out for a year, but how could he when he wasn’t even injured when he signed?

There are times when you can read something 100 times and not see what was staring you in the face but it was only when I was researching a piece about four former Arsenal player who are now free agents that I realised what Yaya Sanogo had said in his interview with France Football back in November.

“Everything went very quickly, in terms of what happened and my big injury,” Sanogo said. “I had a meeting with the boss (Arsène Wenger), who came to see me after matches against Laval and Tours. And, in what he was saying to me, how he spoke to me, it resonated with me.

“I knew that I would be going from Ligue 2 to the Premier League and be out injured for a year. In that sense, things were going fast. You are skipping some steps. But, if you had been in my shoes, would you have decided differently?

“I asked myself a lot of questions. But I said to myself: “Listen, here, the boss has come to see you. He has even called you. You are at Auxerre, in your zone, he wants to see you and he is interested.” I weighed up the pros and cons. But there, I thought: “There, the interest, it is clear.”

This, of course, was not mentioned when he was signed, probably because it isn’t true.

Sanogo signed for Arsenal on 1 July 2013 and was on the bench for their game against Fenerbahce in Champions League qualifying and while he didn’t play any minutes in the away leg, he played 30 minutes in the return fixture at the Emirates on 27 August. 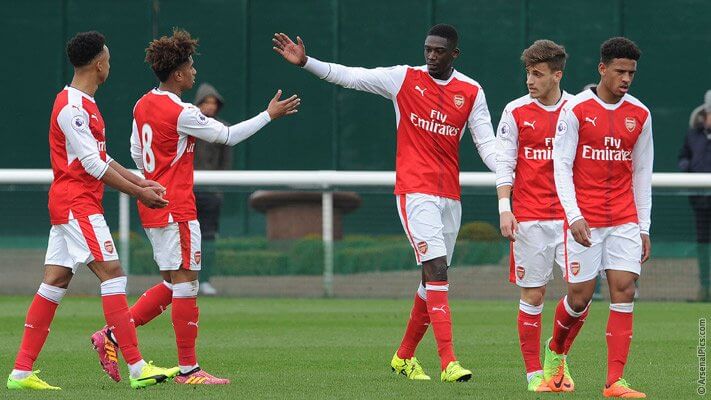 Sanogo was also on the bench for the first Premier League match of the 13/14 season against Aston Villa (yes, that game) and got nine minutes in the second against Fulham on 24 August. It was only after the Spurs game on 13 September, when Sanogo was again on the bench, that he was reported out with the back problem that would eat up the rest of 2013 and keep him out until February 2014.

That still isn’t a year out.

In all, Sanogo played just 519 minutes for Arsenal in his first season, but he was included in the matchday squad 23 times which isn’t really spending a year out.

I had wondered if this was merely a turn of phrase from Sanogo, that he had meant to say something like ‘I didn’t know I’d be out for a year’ but I honestly don’t know what he means.

He wasn’t out for a year after he arrived and it’s hard to see how that might have got confused in his head given how often he was included in the squad.