While men’s football had a test event at the Amex in Brighton with 2 500 fans, women’s football had a smaller gauge down the road at Lewes with 100 allowed. I was one of the lucky few who managed to get a ticket for that game and it was interesting. 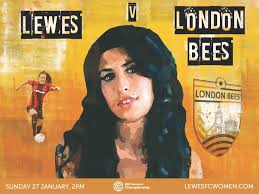 As I previously mentioned, I attended as press two French Women Cup ties in France with limited gauge at 5 000. So I was interested in attending that game. I already went the previous Sunday to a pre-season friendly between Oxford City Women and QPR Women. It was a low key event with barely 30 people in Marsh Lane. You actually had to register for the track and trace and hydroalcolic gel was available at the ground’s entrance.

So I went into Lewes early by public transport as the ground is located next to the train station and arrived to be greeted by the Rookmeister. I had quite a long chat with him as the ground was not open yet to fans. Entrance was made by scanning your QR ticket on the phone or on paper and they checked your temperature before allowing you in.

Unlike in France where masks were compulsory everywhere in the ground for those games I attended, a huge majority of fans were not wearing them at all. In the standing area where I was located the only people with mask were two photographers and myself. Everyone else was mask free. To be fair, if it is not compulsory, why wear a mask?

I personally do because it feels safer, I actually wear a mask as soon as I leave home. This is because I use public transport a lot as a non driver and also because I go out to shop and mask are compulsory in those area as well as bus, tube and train.

There was a queeing system to go into the ground’s pub and food stalls. Hydroalcoholic gel was available while entering the ground as well. Because of the small attendance, people could seat separated by empty seats without problems. I did notice many more people in thes eating area wearing a mask in comparison to the standing area I was in. They had drawn big squares on the floor to indicate where people could stand with safe enough distancing which was a big help.

There was someone actually on hand to direct people to their area in the ground ( seats or standing) and everything was signposted clearly. So a very good organisation overall and safe social distancing achieved without worries.

Certainly a different scale from the 5 000 fans games I attended in France. That 5k limit is the maximum possible right now and is used for all the Ligue 1 games as the 2020/21 has already started at home, as the previous one was terminated by Covid-19 early March.

On the football side, it was good to be back and see many players I had not seen for a long time. Lewes and London Bees drew 1-1 and offered some quality moments. Lewes seemed better organised with solid tactical plan and structure. Bees had players wandering around the pitch freely at time especially the wingers who were often found in the half spaces or even sometimes on the opposite side of the pitch creating a huge overload in certain areas.

So a typical pre-season game with teams still preparing and some players short of match fitness. The FA Women’s Championship will be a very interesting League this season with four teams vying for one promotion place (Liverpool, Durham, Sheffield United and Leicester). Hopefully fans will be allowed as soon as possible in the stands in a couple of months.