Dead Man’s Fingers was my tipple of choice for the Arsenal game at Aston Villa and it went down a lot easier than our opponents.

I’d seen this rum around for a while but had only tried the coffee version. So, when I spotted it on offer, I grabbed a bottle, backed by a load of recommendations from rum fans on Twitter and was drunker than expected by half time. Anyone who was watching Arsenal at Aston Villa in the penultimate league match of the weirdest season ever will know why.

It’s smooth, you see. Unlike Arsenal on the pitch.

Someone with a more refined palette would talk to you about notes and flavours and aromas, but all I’ve got this morning is that I enjoyed it enough to be able to drink it quickly. That matters when you’re an Arsenal fan.

Also, an adult who never got his adult taste buds and gave up on expecting them at least 10 years ago, the less things taste like alcohol, the more I tend to like them.

Take from that what you will.

Going into the game against Villa after beating Liverpool and City and seeing Arsenal start three strikers, I couldn’t help but be excited for a short time. Those 60 minutes between team announcement and team playing were some of the best of the season.

Then the football started and I found myself setting up a rum page more than watching the game.

That should tell you all you need to know about the match. If you watched it, the last thing you need this morning is me rehashing it all again. If you didn’t, those of us who did hate you a little bit.

It was one of the worst performances we’ve seen from Arsenal all season. That’s quite a statement given we had Unai Emery as our manager until before Christmas, but it’s the truth.

The need for a creative midfielder to link play could not have been more evident. We were a side who missed Granit Xhaka, who started on the bench, desperately.

…parents would turn to their amazed grandkids and tell them they were there.

They saw Arsenal beat Liverpool &City in the same week, the legend was true.

"But how?" they'd implore like they'd asked how Santa did his thing in one night.

While some will say Aston Villa had everything to play for and Arsenal little-to-nothing, don’t listen. It’s a distraction tactic. There’s a reason Aston Villa were 18th going into this game. They are not a good football side.

Then again, neither are Arsenal As I’ve said before, we were perhaps no more than a Bernd Leno away from being down there fighting it out with them and Watford.

As it stands, we just have to match Villa’s result this weekend to ensure Troy Deeney and his chums are booted back to the Championship. The highest Arsenal can finish now is eighth, and that’s only if we better Sheffield United (v Southampton) and Burnley’s (v Brighton) results in the last league match of the season.

There’s every chance we will finish where we are today – 10th. The epitome of mid-table, which is what you get when you hire a mid-table specialist like Unai Emery, I guess. 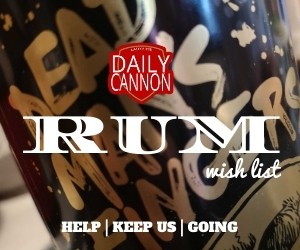 After yammering on Twitter about rum and a Daily Cannon Rum Club, I thought I’d do something about it. Quite what this will turn into, I’m not too sure yet, but I’d definitely like to expand it before the new season starts to become like an actual club where Arsenal rum fans can congregate and chat, not necessarily about just those two things.

You can find out more about how to get involved here.

That’s what this is, a start, and where better to get going than with the rum I used to numb the pain of Arsenal’s latest outing?