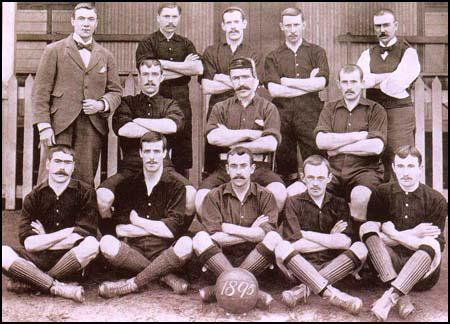 On 23rd November 1896, as Arsenal’s right-back went to kick a high ball during a game against Kettering Town aged just 26, he could have no idea it would cost him his life.

Joseph Powell’s foot caught the shoulder of a Kettering player during this United League match as he stretched for a high ball. As he fell, he put out his arms to break his landing but also broke his right wrist in two places.

Seen as a popular player, Powell was known as ‘Unfortunate Joe’ due to two previous arm breaks. This time, he got really unlucky.

Although medics were able to fix his wrist and arm – he was initially attended at home by the club doctor, Dr. Williams – infection set in and six days later he was dead.

The report of his death, published on 30 November 1896, read, “SAD DEATH OF A LEAGUE PLAYER. THE RESULT OF AN ACCIDENT.

“Joseph Powell, one the full backs the Woolwich Arsenal football team, died yesterday morning, the result of his accident at Kettering last Monday, when he broke his wrist.

“Powell appeared to be progressing satisfactorily until Friday, when blood poisoning and symptoms of tetanus set in. On Saturday the arm was amputated, but he gradually grew worse and died at one a.m. Powell, who was 26 years age, was born at Bristol, and the present was his fifth season with the Arsenal team.”

Other reports add more gruesome details, such as the compound nature of his fracture and that one person, rushing to his aid, fainted when he saw Powell’s bone protruding from his right arm.

Amputation was discussed with two specialists before the decision was made in the hope of saving his life. Powell was too ill to travel to Guy’s Hospital, so the surgeons had to come to Plumstead to remove his arm, but, by then it was too late. One report blamed medics for not cleaning his wound properly.

Another wrote, “From a speck of dirt that got under his skin there came forth a deadly germ, as the doctors explain, and Powell’s accident was followed by lockjaw and blood poisoning.” They also added, “In a case in Walthamstow a boy was playing football when he fell and struck his head against a tree, the consequence was that an abscess formed in his brain about as large as a hen’s egg and killed him. At Bethnal Green, in a board school playground, one boy kicked the ball hard and it hit another youngster in the stomach and caused his death.”

1896 was a pre-antibiotic world and a dangerous one in which to play football, it seems. In fact, the very same year, “the French medical student Ernest Duchesne originally discovered the antibiotic properties of Penicillium, but failed to report a connection between the fungus and a substance that had antibacterial properties, and Penicillium was forgotten in the scientific community until Fleming’s rediscovery.”

Powell would be dead 32 years before it was noticed again.

Born in 1870 in Bristol, Powell started his football career with Walsall before leaving them to join the 80th Staffordshire Regiment.

He stayed with them for five years before Arsenal bought him out of the army when he impressed in 1891 during an army game against Corinthians. A ‘clever’ player, his free kicks were said to be especially noteworthy.

Powell died at his home at 139, Griffin Road, Plumstead, leaving behind a wife and child that, the Penny Illustrated note, “Arsenal club will not forget”.

On Christmas Day, just under a month later, it was reported that The London Football Council voted to give £5 towards a fund being set up for Mrs. Powell. How much it eventually raised is unclear but Arsenal also played a benefit match against Aston Villa to help raise money before the 1896/97 season was out.

The next time a Joseph Powell is mentioned in the papers after 1896 was in 1899 when a bricklayer of the same name was found dead in a dyke near Peterborough after a night out drinking and a fight.

Arsenal’s loss, however, was still being lamented in the papers a good few years later. The club, it seems, still hadn’t found a player of Powell’s calibre to replace him by 1901.

In 1930, Powell was still being talked about ‘as one of the best’ in the Sunday Mirror as part of a piece about ‘Clubs that have made soccer’.