Rehanne Skinner’s squad that included the core of the team that won a Bronze medal at the FIFA u-20 WWC in 2018 defeated a young French squad preparing for the 2020 u-20 WWC to be played in the summer. 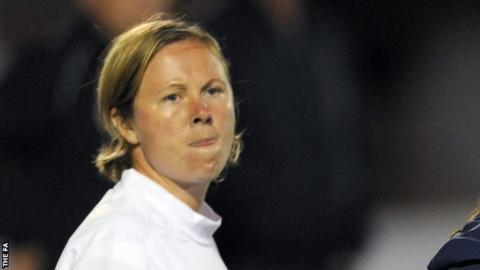 England won 1-0 on Thursday thanks to Rianna Dean and 2-0 on Sunday thanks to Niamh Charles and Rianna Dean again. The former Arsenal striker is in great form and will be a threat on Sunday in the North London Derby for the FA Women’s Cup quarter final tie.

The England manager selected the same starting 11 for both games while the France manager, who is looking at players for his World Cup squad, made eight changes between the games. England played in an unusual 3-4-3 system including a left-footed player at right-wing back. They had indeed selected three left-backs for this double header.

The team was Emily Ramsey; Esme Morgan, Megan Finnigan, Lotte Wubben-Moy; Mayumi Pacheco, Aimee Palmer, Ella Toone, Poppy Pattinson; Niamh Charles, Rianna Dean, Hannah Cain. The only change within the 11 was the two wingers swapped places in the second game with Cain moving to the right wing and Charles to her more natural left-wing, in my opinion.

Three players did not get any time from the two games. Chloe Peplow, who had to withdraw due to a leg injury and was on the bench with a protective boot during the first game and was absent in the second one. Goalkeeper Charlotte Clarke and winger Amelia Hazard suited up for both games but did not set foot on the pitch.

Overall, England were physically dominant for most of the two games, they pressed high on the pitch very often in the first match as France were lining up in 3-5-2 which allowed for many interesting pressing situations. They reverted to a deeper defensive block in the second game, in medium position, as France went back to a classical 4-3-3 and were able to play the ball from the back more often.

It was two solid defensive displays with two clean sheets thanks to many saves by Ramsey in both games. Morgan and Wubben-Moy were solid in defense. On the attacking side the front three were all very lively and scored all the goals, Pattinson recorded an assist and was sharp as the left-wing back. Toone made many good runs from deep in midfield.

Among the substitute Syme showed a lot of good quality on the ball, creating chances and taking a few shots. Scofield offered her physical strength when called up in midfield.

As usual for the players selected in those squad, there is always the question mark if they can make it to the Senior squad. Obviously the best players from that 98/99/2000 generation have already made it to Phil Neville’s squad and are currently in the USA taking part in the SheBelieves Cup.

There is no doubt in my mind that three or four of the players in that squad will end up playing for the Lionesses in the near future.  It will depend on the England manager (Phil Neville or his successor) giving those players a chance.

The next game for this squad should be the La Manga u-23 tournament in April. England will play Germany on 9 Apr and the Netherlands on 13 Apr.

2 Arsenal players make World Cup Qualifying Team of the Round