Arsenal will reportedly earn as much TV money as Manchester City and Manchester United by the time Xmas rolls around.

That’s according to Fans of the EPL who “explores the relationship between television, money and the fans, to see if flooding the market with live football has put supporters off attending matches and what difference that has made to the way we consume live football.”

With teams paid £834,770 per televised game that means by Christmas, Arsenal will rake in £13,356,320 for making people want to claw their eyes out watching Unai Emery’s idea of football.

And we’re still a much bigger draw for TV companies than the best Tottenham team that has ever existed. 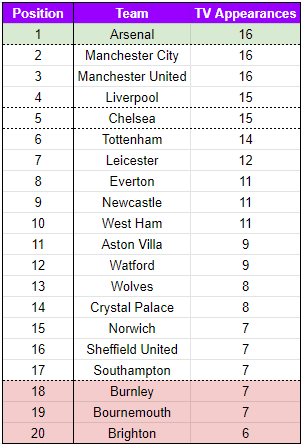 Of course, an important point should be made here that the more times a team is on television the more money they make, ensuring the bigger teams are more likely to maintain their advantage over the likes of Hull who used to average nine TV appearances a season when they were in the Premier League.

How much is Bukayo Saka worth?

I’m quite smug about it actually: Katie McCabe signs with Miss Kick