Tony Pulis is trying to make out like Serge Gnabry was no good when he was at West Brom, but we all know he’s lying, including the player himself.

Speaking after Serge Gnabry spanked four past Spurs in the Champions League on Tuesday night, Tony Pulis tried to explain why he only gave Gnabry 137 minutes of playing time when they were both at West Brom.

“I’m amazed,” Pulis hilariously told Sky Sports. “We had him at West Brom, we took him on loan and we could never get him fit. He got taken off in an under-21 games.”

If Pulis is amazed, he’s the only one.

Back in 2016, when Serge left for Germany, I wrote that he would be Arsenal’s Paul Pogba, the player that left that they would regret the most and cost the most to buy back.

If I could see it then without access to Gnabry on a daily basis in training, Pulis must be a right idiot.

Ahead of the game against Spurs, Gnabry was interviewed by Rob Draper and asked about what went wrong with the Baggies.

“Different styles, different opinions. I can’t really say too much, but I tried my best at West Brom and it didn’t work out.

“I was told I would be getting a lot of game time, otherwise I could have signed for another team. They really seemed like they were going to play me and I spoke to the manager before…

“Mentally for me, in that time at West Brom, I said to myself: “Even though I have zero chance of playing, all I can do is work hard.” That mentality has stayed with me today and helped me to become a Bayern player.

“You always know your worth, off the pitch or on the pitch. I knew my capabilities. But I would say the mental side progressed really high during that time and helped me be who I am now.

“I think that’s one of the things you learn through your career, that it doesn’t always go well. From a young age until I played in the first team at Arsenal it always went like this ( he gestures upwards) and then suddenly I learned; “Woah, it doesn’t always go up.” And I learned to deal with that.

“Obviously at the Olympics I got the chance to play regularly and that is one of the big things. I’m sure that if he (Pulis) had given me some time I would have showed what I’m capable of.”

Gnabry was just 16-years-old when he left Stuttgart’s academy to join Arsenal.

The German winger excited many during his time in our youth teams and eventually earned a call-up to the senior squad.

He made just 18 first team appearances for the club, however, despite looking like a highly promising talent.

Unfortunately, a lengthy knee injury and that terrible loan spell at West Brom curtailed his progress.

He left the club for Werder Bremen in 2016, and did so well he was signed by Bayern Munich a year later although there were reports that the initial move was funded by Bayern in the first place, a charge the Germans denied despite the fact they signed Gnabry 12 months later as the rumours reported they would

“I was 16 and remember that when I received an offer from Arsenal, I couldn’t believe it,” Gnabry said, as reported by Fichajes back in February. 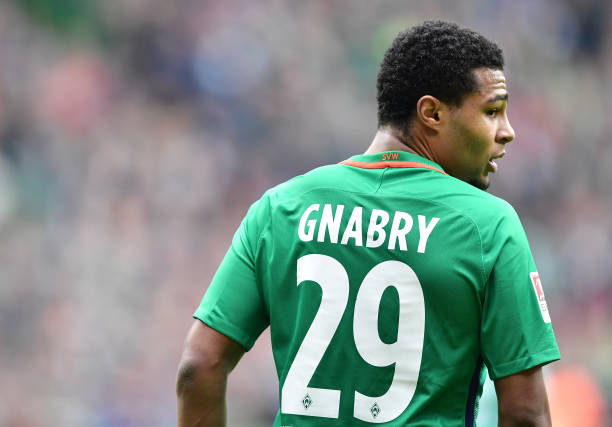 “I had no doubt because it’s an ideal scenario for any young player who wants to make a name for himself and work with a coach who relies so much on the youth team.”

You can read more from and about Serge Gnabry including him explaining why he left Arsenal, why he wanted to stay, how he misses England and might return one day, why he joined Arsenal in the first place, and how Mesut Ozil is the best he’s played with by following these links.

Bukayo Saka names surprising player who helped him the most