On a recent Daily Cannon podcast, Matthew and Chris really got stuck into Unai Emery.

If you missed it, you can listen here (or in all good podcast apps), and the transcript is below.

Chris: I think if we’re looking at the last 18 months of Emery at Arsenal and looking at what he did at PSG and Seville, I don’t think we’re going to see much of a change.

We’ve got a good run of fixtures coming up in the Premier League, I don’t think we’re going to suddenly start playing brilliant, pleasing-on-the-eye football, dominating teams, where the plan all comes together and we get the high press going, overlapping fullbacks, banging in goals.

I just don’t see that happening under the current regime.

I think it’s quite clear to the listeners that I’m not his biggest fan at all. I’ve not really seen much over the last 18 months to warrant keeping him beyond this year regardless of what we do, to be honest with you. I mean, if we finish in the top four, even then I’m against keeping him.

I think what we’re seeing in this current period, it reminds me a lot of the unbeaten run we had towards the beginning of last season when we won something like, it might have been 8 or 9 games on the bounce, and fans were singing ‘we’ve got our Arsenal back’, and there were one or two brilliant performances in that.

But by and large, we got quite lucky in places, and the scorelines were quite flattering as were the results, and I think we’re probably seeing a bit of that now and we’re probably going to see a bit of that again with these fixtures coming up in that…you know, we’ll probably pick up quite a lot of points over the coming weeks, but the performances aren’t going to improve and I think we’ll come unstuck at the end of the season.

I hope I’m wrong, but that’s just what I think is probably going to happen.

Matthew: So you’re very much in Unai Emery as a less fun, Spanish Bruce Rioch?

Matthew: Well, I mean my theory that I’ve been expanding for a while is that may well be the role that he was hired to fill in the first place in that that…the biggest complaint anyone labelled at Arsene Wenger, particularly towards the end, was lack of tactical flexibility, lack of discipline within the team, lack of defensive focus, as it were, but even to a degree with a lack of discipline within the camp.

You know, people can refer to the Colney crash, or whatever, and the idea of us not having a sufficient work ethic. Is Unai Emery the two-year medicine to make sure that whatever comes after him is free of that? He’s expunged many of those flaws from the club, even if he has, within his own system, left us with others. 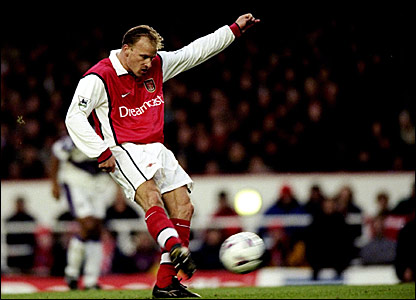 People forget that Bruce Rioch took us from the dying days of George Graham, mid-table and playing turgid football, to a back three, and bought Dennis Bergkamp and David Platt and made us fun again, despite the fact we had shite in central midfield.

So I think Bruce Rioch gets a slightly rough deal simply because Arsene Wenger turned up and was amazingly transformational.

Chris: We probably performed a similar function of a palette cleanser in two defining eras for Arsenal, really, and I’m wondering if that’s the role that Unai Emery’s going to fulfill here as well?

The ‘Big Courage’ of one Arsenal player

One That Got Away from the Gunners: Jamie Vardy

How Can Arteta Get the Best Out of Aubameyang?