Unlike many footballers, Hector Bellerin has never shied away from talking about the larger, more important issues at play in the world today and on Monday night Arsenal reminded us of why he thinks it’s important footballers use their platform to exact change. 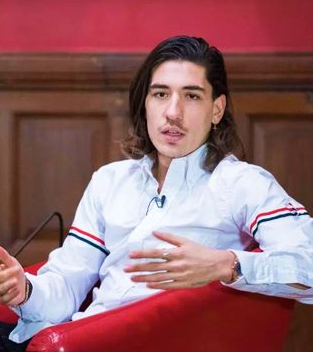 Here at DailyCannon, we’ve always tried to address issues of inequality in the game that others try to avoid, so Hector Bellerin is one of our favourite people on the planet for his willingness to do the same.

Speaking to the official Arsenal site back in 2018, Bellerin talked at length about social responsibility and Arsenal selected part of his quotes to tweet out for Arsenal for Everyone.

As it’s an important message, let’s remind ourselves of what he said:

With social issues, I think as footballers we have a massive platform that we should be using way more than we actually are. I know it is very comfortable to just sit at home and stay with your family, your kids and your friends and not think about anything, but with the platform we have, we should be the people that scream at these social issues and out them out there, so as a society we can move forward. There are so many things for me… the climate is a big one, obviously after going plant-based, going vegan, all the things around that is something I like to get involved with. Plastic is a massive issue as well, growing up in the coastline of Barcelona and going back now and seeing all this rubbish in the sea – when I enjoyed it as a kid – makes me sad for the next generations. There are so many things as footballers that we could help more with.

I think it is so different. I think the new generation, not just my one but the ones that are coming after me, they are people that know what is happening, there is so much information there now on the internet and on streaming services, they are raising these problems. The young people and the youth are trying to fight for a world where there is equality, where everyone is the same and helping each other. We want to take care of the planet, we want to make it a better one. It feels like the people who are ruling it want to do it the other way around: they want to separate people, they want to make even more damage on this earth while we are trying to make it better. So if the youth keep having the same mind right now, this open mind that we can have a better world than we have right now, then I am sure it will happen and it will be better altogether.

Sometimes they [footballers] don’t understand and sometimes they do, but they’d rather sit at home without pushing these issues. For me, when I raise these issues I always have a backlash in terms of ‘you should just stick to football’ but it is not about that. There are problems that everyone can see but some people try to hide them. When you have a voice, a platform and a following like we do, we are influential people, people that kids growing up want to be like us – and even adults want to have a son like us, or live the life we do – there are not many people in a better position than us to raise social issues, racial issues or environmental issues than anyone else. It is our duty to do the most we can with it.

There’s all sorts of issues. I feel like the football industry is an industry where we have to be really quiet and play. I think the code around it is that footballers can’t really do anything else other than kick a ball. This is kind of the stereotype, so when there’s a footballer who’s stepping out of the box he’s always seen as someone that is not focused enough on football because he’s doing this, he’s doing that. As I always say, we have so much time and we’re humans so we have issues and worries. We should push these things. I think in America they’re more advanced in terms of these things. A lot of players have come out talking about mental health for example. This has always been something that has been very taboo to talk about, especially for men. After that, I know that Danny Rose had to talk about it. All these issues which, back in the day there was a stigma for men to talk about it or there was a stigma as a group of people, as footballer to talk about these things, it’s important that we take these chains off and start talking about it moving forward with an open mind.

If you put it just that way [that it can have a domino effect], Imagine there’s a kid out there who’s not happy with himself. He’s not a kid, a teenager and he knows that he’s got an issue but he’s scared because he doesn’t know what his family or friends are going to think about him. Then a player who he looks up to, like Danny Rose, raises this issue, it’s probably going to give this kid the push he needs to get out there and talk about it. From there, hopefully he can then be back in the best health he can, and move forward from that issue. There’s so many people like that who don’t actually know they even have an issue until they can put two and two together by thinking, ‘Oh this guy has said this, maybe I have the same problem, maybe I should talk about it and maybe I should solve it’. There’s so many good things and positive things that come with raising problems and actually showing people that we’re humans. We’re not machines, we’re good at what we do, we have talent and we work really hard but sometimes it feels like this is all we do and our life is just playing football. It’s not. We’re humans, we have a life, we have families and we have problems, worries, and it’s important to speak about them to get people to relate to ourselves as well.

I don’t think I would go that way [into politics]. I was very impressed with George Weah’s story. I knew Arsène Wenger was always very close to him. He spoke about him a few times when we had team talks. We knew how much it meant to him when he signed him and then seeing that he evolved to become the president of Liberia. It’s amazing that the power of football can give you that window to raise all these problems and then become the president of your country. When it’s all about helping your country or influencing the people to move forward, it’s something that is amazing. Sometimes people send me messages where they are drinking the same canned water that I drink and say they’ve given up plastic, those things make me happy, even if it’s just one person. I spoke about the plastic issue a couple of months ago. Some kids at a north London school saw it and I had 400 letters from kids at that school saying they’d seen it. They’re just little kids but they’re so understanding of the damage it has done. They wrote about seeing a video of a whale, and it’s so sad. When you can influence people, even if it’s just a small group, that’s what makes me happy and makes me not listen to all the bad things people say about me. All of that makes me a thousand times more happy than the other stuff can make me sad.

I saw something the other day along the lines of ‘oh, it’s only one straw’. That’s what billions of people said and it is kind of like that. A lot of people think the message isn’t to them because they’re only one person in a massive world. But if everyone takes that same action for good, it can save tonnes of water, plastic, animals. Everyone needs to feel that this message is to them. It would be very selfish to think it’s not. We can’t live in a perfect world right now, and we probably can’t not use plastic at all. But if there’s one little thing you don’t buy, or don’t use, and swap it for something better for this world, if everyone did that, we could make it happen.