Manchester City, Manchester United, Liverpool, Chelsea, Arsenal, and Tottenham have been holding ‘secret’ meetings in the exclusive dining rooms at Mosimann’s in Belgravia and they even have a WhatsApp group according to a report in Monday’s Daily Mail.

The top five clubs, and Tottenham, are chasing a bigger slice of the TV pie, eyeing up a deal more akin to the one they have in La Liga where clubs negotiate their own share, leading to the larger clubs picking up more cash and keeping them ahead of the smaller ones. 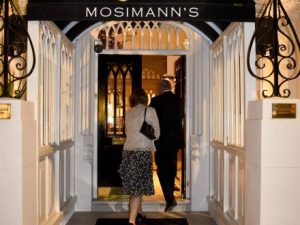 As it stands, Premier League money is distributed relatively equally amongst all 20 clubs whether you’re Manchester City or Huddersfield Town and the big boys aren’t happy about that.

Richard Scudamore had offered them a ‘larger slice of the overseas TV rights’ but this doesn’t seem to have quelled their greed.

“Such is their desire to continue acting together in pursuit of a bigger share of TV rights cash, they made sure they met Susanna Dinnage before the TV executive suddenly changed her mind on becoming Scudamore’s successor,” the Mail writes.

“Senior figures in the game think it was this testosterone-charged encounter just before Christmas that persuaded Dinnage to stay as global president of Animal Planet.

“The search for a new chief executive, led by Chelsea chairman Bruce Buck, continues in vain. Last week Richard Masters, the Premier League’s managing director, was confirmed as interim chief executive at Companies House, but the PL are anxious to hire an administrator with more television know-how.

“Dinnage’s expertise in TV and digital media was thought ideal given some insiders feel the organisation will explore whether to launch their own streaming service. UEFA announced similar plans last week and will unveil the originally named UEFA TV from 2021.”

Clubs also receive a ‘facility fee’ which is dependent on how many times they are shown on TV. Each side is guaranteed £12,312,666 regardless of how many of their games are televised. They then receive another £1,129,879 for every game they feature in above 10, i.e. Huddersfield had 10 games on TV last season so picked up the minimum £12m. United had 28 games shown so received £32,650,495.

Eash side was also given ‘merit money’ based on their final league position.