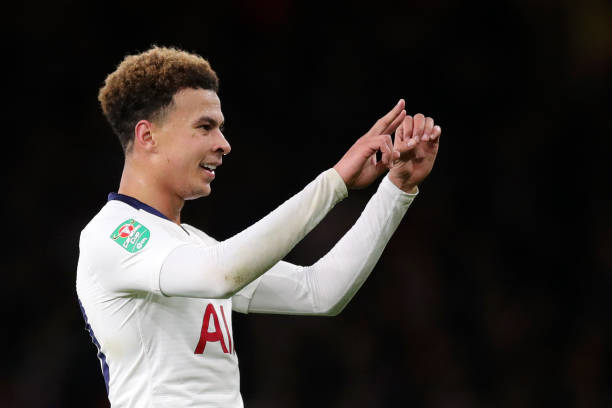 Arsenal have issued a strong statement that leaves no doubt about how they feel regarding the idiot who threw a bottle at Dele Alli on Wednesday night.

The fan, who was reportedly seen leaving the ground shortly after hurling the object, is currently being sought by the police and can no doubt expect to face a lifetime ban from the club for his moment of unacceptable stupidity.

In addition to stating that the fan ‘embarrassed’ Arsenal, the club also issued an apology to Dele Alli and Tottenham for the incident.

“We have all been embarrassed by the individual who threw a bottle at Dele Alli during Wednesday night’s match against Tottenham Hotspur,” the statement read.

“Behaviour of this type has no place at Emirates Stadium and after analysing CCTV footage, which showed him leaving the stadium after throwing the bottle, we have identified an image of the suspect. We are liaising with the Metropolitan Police and investigations continue in order to apprehend the culprit.

“We are not responsible for the actions of one individual, but send our apologies to Dele Alli and everyone at Tottenham Hotspur for this incident.

“We do not tolerate any anti-social, discriminatory or violent behaviour at Arsenal Football Club. Anyone identified will receive a lengthy club ban and their details will be passed to the police to commence legal proceedings.”

On a side note, it’s hard to ignore the rise in incidents like these across football and if we continue to treat them as just ‘individuals being idiots’ we will never sort the problem.

From the racially charged banana skin thrown by a Tottenham fan, the glass bottle thrown at a Crystal Palace player recently and the anti-Semitic chants reportedly sung by the Chelsea fans on a number of occasions, the UK Police Football Unit note that ‘incidents’ are up 37.8% since 2016 and ‘missile incidents’ are up 25% in 2017/18 while there has been a 13% decrease in arrests*.

2016 was, of course, the year of Brexit which seems to have emboldened many to lose control of themselves.

Pulling one person out of a crowd and banning them deals with that incident, but it doesn’t deal with the wider problem.

*stats via Sky Sports News who got them via @MPSFootballUnit