We all know about Unai Emery’s love of video but it seems the Arsenal head coach is just as crazy about books, picking out titles for his players based on what he thinks will benefit them.

Unai Emery is a studious man. That much is clear to anyone who has spent any time listening to him. In an interview with Romain Molina for his excellent authorised biography of Emery, the Spaniard revealed his love of books, what he’s been reading recently, and how he tries to get his players to read more.

“My doubts and fears helped me to learn how to manage the pressures of being a manager and my work with the players,” Emery told Molina.

“I’ve also relied a great deal on books about self-confidence and personal development. A lot of what I’ve read has allowed me to apply these ideas to the players, but to give you a full answer, I was already interested in studies about being a manager while I was still playing.

“Not many players study about training when they haven’t yet retired from the game. I got my diplomas, and when I became a coach I read a lot more about psychology, group management, pedagogy (the method and practice of teaching, especially as an academic subject or theoretical concept, leadership, in order to overcome all the weaknesses I had as a player and to be able to put ideas into practice with my future players.

“Daniel Goleman (author of Emotional Intelligence), Manuel Vazquez Montalban, John Maxwell,” Emery replied when asked about authors who have helped him in his learning process.

“There’s also one book I like enormously, ‘In Pursuit of Excellence,’ by Terry Orlick. There are lots of other authors I appreciate, I read a bit of everything, including books about football. At the moment I’m reading about Guardiola and I’ve also got the one on Simeone, but I haven’t started that yet. 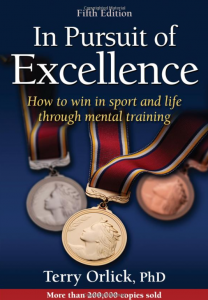 “I also have Bielsa’s biography, and I really liked the first books that came out about Mourinho and football tactics in Portugal!

“I’ve always offered my players books to read, although not to all of them. If I’ve found some books useful, I go and buy them and then target players they could be helpful to.

“In my first seasons at Valencia I bought two books for each player. However, there were thirty people in the squad, and I knew that some of them couldn’t give a damn, they weren’t really committed to the team. So, I told the players; “I’ve bought two books for each of you. Any of you who want them can come and get them in my office.” Immediately afterwards, several players turned up: “Boss, I’d like the books you thought of for me.” Not all the squad came, but a lot of them did.

“That was a moment that made me really happy. To see them in my office, asking for books, talking about what they had read…In all my teams, players have asked me to recommend books, especially Mata, but he’s a special case.

“When I was at Seville, I recommended Victor Valdes’ biography to Sergio Rico because it’s a story about suffering, about the sacrifice needed to become a great goalkeeper. Sergio had his doubts at the start of his career, so I talked to him a lot, advising him not to speak to the press and to come with me at the end of the day to do extra training. At the end of the season, when we won the Europa League, his father wanted to come and see me to thank me. That was perhaps my greatest satisfaction.”

Mertesacker: News was banned, the 8-2 changed nothing & Arsenal sent boring players to speak to the press