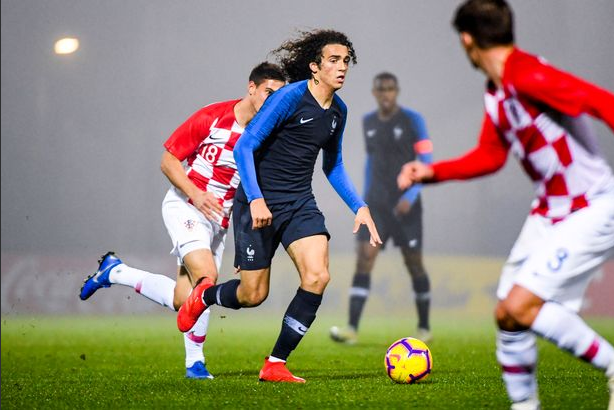 Matteo Guendouzi has been hailed by the French media after the Arsenal 19-year-old made his first appearance for their u21s in a 2-2 draw with Croatia on Thursday.

Matteo Guendouzi was called up to the Blueberries for this round of international fixtures and started their game against Croatia in Beauvais, crowning his first baby cap with an assist that helped save a point.

Writing in L’Equipe about Guendouzi’s performance, the respected French publication said about the Arsenal midfielder’s performance that, “Guendouzi gave the impression of being, at 19, the boss.”

To be fair, it’s an impression he’s given at Arsenal all season When he arrived in the summer he was very much earmarked as ‘one for the future’ by pundits and football journalists alike but went straight into the first team in Lucas Torreira’s absence and has been a steady part of things ever since.

Guendouzi was quick to dismiss the claims, however, saying after the game, “No, no, there are already bosses, executives in the team. In Arsenal, as in Lorient or with the Espoirs, I will not change, my attitude on the pitch is like that, I always want to win.

“It is transcribed by gestures but I do not pay attention. I try to adapt to the team, there is a group that has already worked very well in recent months before my arrival. My teammates put me at ease, they made things easier today, they gave me a lot of balloons. I did not feel any particular pressure, I play as I know how to do.”

Speaking about Guendouzi, the French u21 coach, Sylvain Ripoll, who worked with Guendouzi when they were both with Lorient, said, “He is on the dynamics of his very good start to the season with Arsenal, he has integrated well.

“He is a player with volume, he is fresh, enthusiastic, he showed his qualities tonight.

“I know him like that. He has this carelessness, this faculty of never wanting to undergo events.”

Who is fit to lineup for Arsenal vs West Ham?

What is Arsenal’s record at Wembley?