Arsenal welcome Everton to the Emirates Stadium on Sunday, after securing their first win of the Europa League campaign against Vorskla on Thursday.

Arsenal are putting a good run of results together under Unai Emery right now. After a couple of disappointing, but perhaps understandable, defeats to Manchester City and Chelsea in the opening games of the season, the Gunners have gone on to win the next four in a row in all competitions.

Looking to make that five, Arsenal now have to beat an Everton side that have started the season in very mixed fashion. The Toffees actually went unbeaten for their first four Premier League games, but only managed to win one. Then they lost to West Ham, who previously hadn’t picked up a single point.

Emery is likely to name a much-changed side from the mid-week Europa League game. Let’s have a look at our team predictions for the match.

Unai Emery hinted that Bernd Leno would play again in the next week, but most likely that will be against Brentford next Wednesday. On Sunday, Cech should return to the starting line up, after his rest in mid-week.

Hector Bellerin should replace Stephan Lichtsteiner on the right, especially after the Swiss international had a bit of a shaky game on Thursday. Nacho Monreal is still Arsenal’s only option on the left, other than 18-year-old Dominic Thompson, as the only other fit academy left-backs played on Friday and Saturday.

Sokratis Papastathopoulos has been very consistent for Arsenal in the last few games. He’ll likely start alongside Shkodran Mustafi, another to get a rest against Vorskla. Rob Holding did well in that match, but perhaps not quite well enough to displace the starting pair just yet.

Fresh from an impressive performance against Newcastle United and a rest in mid-week, Granit Xhaka is nailed on to start. Aaron Ramsey should also be fresh for the match, but the third midfield position is a bit more difficult to predict.

Lucas Torreira has been fantastic when called upon so far, and played well in his first start against Vorskla. He even got subbed off with over a third of the match to play.

However, after fans spotted Torreira wearing an ice pack on the bench, and Emery admitted he’s not sure if the Uruguayan will be fit for Sunday, it’s very possible Matteo Guendouzi will retain his place in the starting eleven. It simply depends on the injury, so this one is anyone’s guess really.

Alexandre Lacazette was completely rested on Thursday, and with his Premier League form at the moment, he’ll undoubtedly start again at the Emirates.

Meanwhile Pierre-Emerick Aubameyang looked back to his best in his start against Vorskla, with a couple of goals. Coming off after 57 minutes, he should be available to join Lacazette in the attack.

Mesut Özil will take the third spot, as he was also impressive coming from the bench in mid-week. Scoring once and almost creating another within minutes of entering the game, he looked a level above the rest.

Henrikh Mkhitaryan has more goal contributions than anyone in the Arsenal squad right now, but he picked up a knock on Thursday. There’s no reason to risk making that worse when Lacazette, Aubameyang and Özil are all in great form anyway.

Danny Welbeck will likely drop to the bench despite his Vorskla goal, after playing the full 90 minutes. 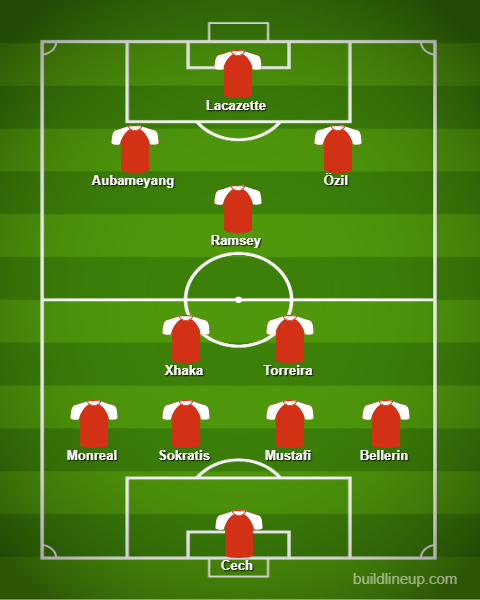