Stephy Mavididi is loving life in Italy after joining Juventus and getting the chance to train with Cristiano Ronaldo.

The former Arsenal youngster surprised many when he signed for the Old Lady in the summer transfer window and according to reports in the country since he joined, has made a strong impression.

Mavididi had already scored once for the Arsenal u23s before leaving for Juventus in mid-August, and he’s certainly carrying that form to his new team. In five games for the Italian club’s youth side so far – three friendlies and two Coppa Italia matches – the striker has five goals.

Speaking to Tuttosport, Mavididi explained what it is he likes about his new club so much, and how he couldn’t say no to Arsenal – until he said no in the summer and left, of course.

“At 4 or 5 years old, my mum enrolled me in a football school,” he said. “After a little while, teams like West Ham, Chelsea, Arsenal were following me. Then at 9 years old, I joined Sutton United which seemed to be the best choice for me and my growth.

“I learned a lot there as I then moved to Arsenal at 12 years old. I couldn’t say no to the Gunners!

“I was used to being the best but after joining Arsenal, everyone was good so it was harder. I signed my first professional contract at 17 which was a huge honour for me. 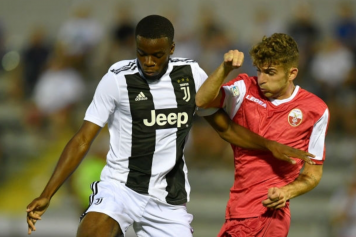 “Henry? He has always been my idol and I got to work with him since he was in charge of the Arsenal youth at the time. We had a great understanding and I learned a lot from him. Work, work and work, this was his motto for me.

“Ronaldo? To train alongside him is incredible. I try to listen to everything he says since he is one of the best players in the history…”

In a way, it’s still a bit difficult to understand this transfer. Mavididi wasn’t getting first-team chances at Arsenal, so leaving makes sense. However, it appears he’s swapped the Gunners’ academy for Juventus’. He could’ve played youth games in North London, or taken a loan to a team that would play him regularly, like Reiss Nelson who scored with his first shot after just 14 minutes of his Bundesliga debut with Hoffenheim.

After the game, Nelson told the media, “We played very well from the start.

“We had a lot of chances and we created them from start to finish. I thought our focus wasn’t there at the last bit. I think they had it over us at the end and that’s why they scored at the end and won the game.”

As for Mavididi, hopefully, he keeps impressing for the Juventus youth team and gets a senior chance in the near future. From an Arsenal point of view, they could still regret letting him go.