Mesut Ozil collected two assists against CSKA Moscow, probably should have had at least five and strutted around the Ashburton Grove pitch with a swagger his talent deserves, so of course the first thing you will want to do when talking about him is tell everybody he is a flattrack bully, right?

That’s what the Telegraph’s Jason Burt decided he had to do as he wrote his match report, stating, “With their season on the line, Arsenal delivered with Mesut Ozil the magnificent orchestrator although before anyone should get too carried away there was, as ever, that nagging doubt that the playmaker only really comes alive against modest opposition; that he is a footballing equivalent of a flattrack bully. Still Ozil took wonderful advantage of the space afforded to him.” 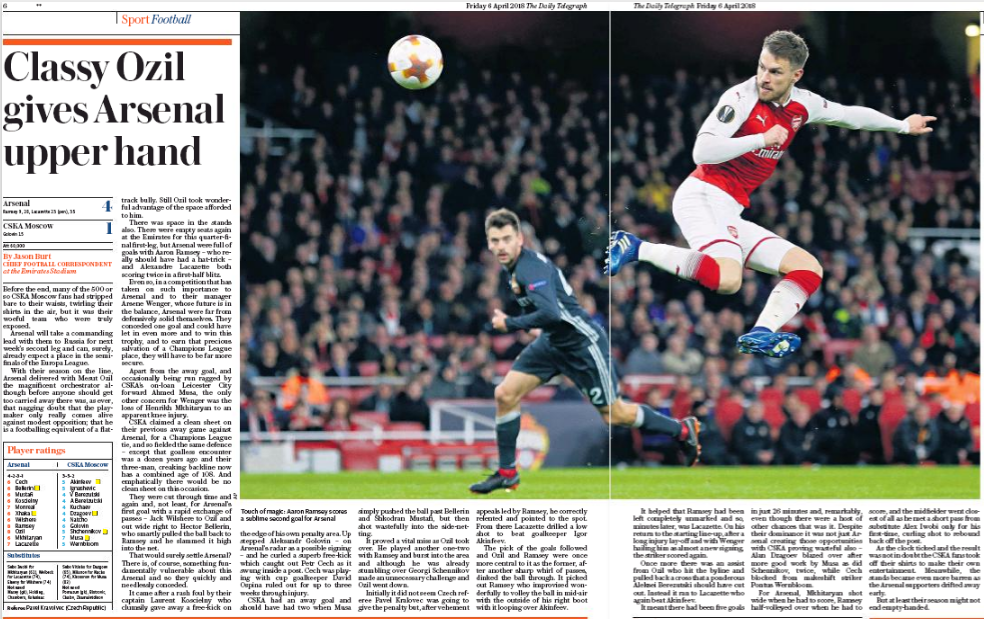 The loudest chant of the evening was for Mesut Ozil as the fans sang his song.

In the crowd, there was no nagging doubt about Mesut Ozil. There rarely has been since he arrived at the club from Real Madrid 2013.

It is only in the papers we are told about this persistent doubt and it is the papers who do the most to keep it going.

Is Ozil a flat-track bully?

But what is Ozil’s record like against the bigger teams?

On first glance, I didn’t think Ozil’s record seemed that impressive so I decided to check it against someone else.

I took a random player, who popped into my head when I thought of players at other top clubs who play a similar role.

David Silva, who is never accused of being a flat-track bully, was that player.

He has 14 goals and 30 assists giving him a direct goal involvement rate of 3.176 – worse than Mesut Ozil.

As we saw against CSKA on Thursday night, Ozil could have easily had five assists if the finishing of his teammates had been better and despite being the leading assist maker in England since his arrival, we all know his tally would be even better if he had more clinical strikers in front of him.

But leaving all that aside, it’s clear to see the Ozil narrative in play here once again.

Even when he destroys a team we still have to listen to ‘yeah, but…’ in a way that is never applied to other players.

Nobody here is saying David Silva is a flattrack bully, in fact, nobody anywhere ever says that because he’s not.

But Ozil? He regularly gets accused of that despite scoring and assisting at a better rate against the top teams.