When Alexis Sanchez left Arsenal for Manchester United in January, Arsenal fans warned their northern counterparts that Alexis was a great player but he gives the ball away so much he drives you crazy.

Many United fans thought Gooners were just being bitter about losing their Chilean star but the stats back up Arsenal fans. They weren’t being bitter at all – they were telling the truth.

Since arriving at United, Alexis has given the ball away an astonishing 247 times. Numbers on their own say little, so when you realise this is 100 times more than any of his teammates, you see that it is an issue.

He has also been shooting significantly less than when he was at Arsenal, registering around 50% of the shots-per-game totals he was seeing while at Arsenal.

Jose Mourinho thinks Alexis will come good next season, but as I wrote in an editorial last night, there is no guarantee Alexis will ever hit his 16/17 form again. 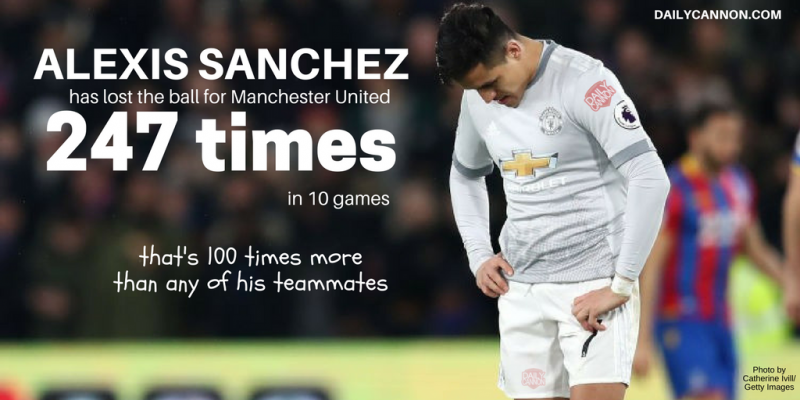 Speaking while on international duty, Alexis admitted that he is struggling.

“As I am self- demanding, I expected something better,” he told the media.

“The change of club was something that was very abrupt. it was the first time I’ve changed clubs in January but many things have happened in my life that are difficult.

“I asked the manager for permission to stay in England but, having thought about it, I thought it would be good to be here to start things off on the right foot.

“I told Claudio we should all be united.”

“Uncertainty” and “anxiety”: Former Gunner reflects on his Arsenal exit