Arsenal have submitted their Europa League squad for the rest of 2017/18 and there are a couple of surprises in there.

Henrikh Mkhitaryan is able to feature for Arsenal in the Europa League as he played in the Champions League while at Manchester United, which is handy if a little depressing.

The 29-year-old has either chosen or being given the #77 shirt to wear for the competition. For the Premier League, he wears #7. He cannot wear #7 in the Europa as Alexis already wore it for Arsenal in the competition. 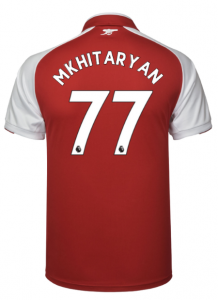 #77 will be the highest number ever worn by an Arsenal player.

Another interesting inclusion is Santi Cazorla.

The little Spaniard has been out of action since October 2016 with an Achilles problem. The surgeries required and resulting complications has left the midfielder struggling to return to fitness.

With the 33-year-old’s contract at Arsenal running out at the end of the season, most of us presumed we would sadly never see him play again.

Hopefully, his inclusion in the Europa League squad is because Arsenal genuinely think he could make a return for us and not ‘just in case’.

Konstantinos Mavropanos, Arsenal’s new centre-back who they signed from Greek club PAS Giannina at the beginning of January, has also been included in the Gunners’ Europa League squad.

New club record signing Pierre-Emerick Aubameyang isn’t eligible as he’s cup-tied. The 28-year-old has already played with Dortmund in the Champions League and as they have dropped into the Europa, he cannot feature.

The players taken out of Arsenal’s Europa League squad are: