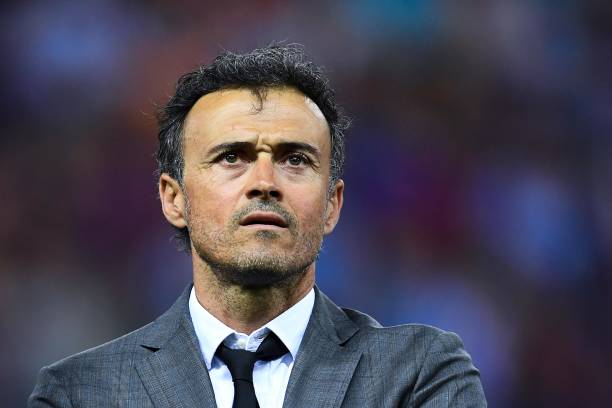 According to reports from Spain, Luis Enrique could become the next Arsenal manager, even though the ex-Barcelona boss is tipped to take over from Antonio Conte at Chelsea and Arsenal aren’t ready to get rid of Arsene Wenger.

Mundo Deportivo report that Enrique’s next venture will be in the Premier League.

While the former Barca boss looks more likely to take over at Chelsea given their results over the past couple of matches, Arsenal are also said to be in the frame if Arsene Wenger stands down at the end of the season.

Of course, no one’s quite sure whether that will actually happen.

The Frenchman has never stood down from a contract before and he has a year-and-a-half left on his current one.

Then again, Arsenal haven’t been quite this terrible before either.

Paris Saint-Germain have also been linked with the 47-year-old, who starred as a forward at Real Madrid and Barca during his playing career.

Unai Emery is reportedly likely to leave the Ligue 1 giants at the end of the campaign.

Le 10 Sport (via Tribal Football) have also suggested that he could join Arsenal.

However, Spanish pundit Guillem Balague believes that Arsenal are now an unlikely destination for Enrique.

Speaking on his Youtube channel, Balague said: “It’s an interesting situation for him because he will want to go to a team that can challenge for everything.

“It’s quite clear PSG will give him the opportunity to win a lot of titles.

“In the case of Chelsea, I know he has been preparing to go to the Premier League.

“He’s been learning English. I’ve spoken to him a few times and he’s told me there’s a fascination about the Premier League and it seems to be the place to go if you’re a manager.

“It’s not the time yet that he’s going to Chelsea. I haven’t heard anything about an offer from Arsenal.

“If they decide to get rid of Arsene Wenger of course he will be a candidate but I don’t think they have reached that stage yet.”

Enrique won the La Liga title twice while in charge in Catalonia, the Copa del Rey three times and Champions League once (2014/15).

Would he be an adequate replacement for Wenger? I doubt many Arsenal fans would currently argue.

At the moment it looks more likely that he’ll be going to Chelsea and Gooners seem to have their hearts set on Carlo Ancelotti.

Editor’s note: Ballague is much-maligned and often with good reason, however he has extensive connections in Spain and was the first to break the news of Arsenal trying to sign Pierre-Emerick Aubameyang, moving his credibility up a notch or two.