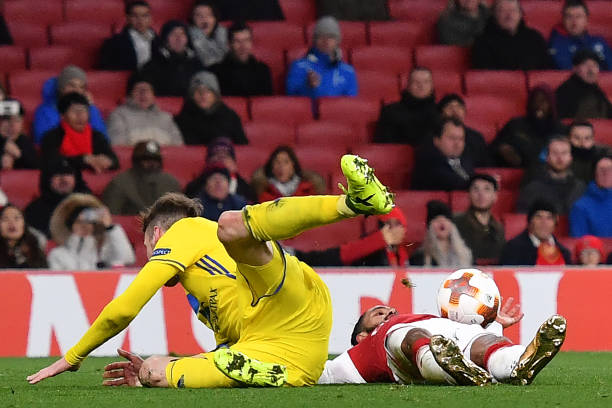 A record low crowd came out to see Arsenal thrash BATE Borisov on Thursday night but just how bad was it?

Arsenal announced that they sold more than 54,000 tickets for the Europa League clash against BATE Borisov, but far fewer people actually bothered to turn up to the game.

The Daily Mail claims that less than 30,000 fans turned up on Thursday night, which would smash the record for the lowest attendance at the Emirates Stadium.

The record had already been broken this season, when 44,064 turned out to see Arsenal just about overcome Doncaster in the third round of the Carabao Cup.

Before then, the record stood at 46,539 for Arsenal’s League Cup tie against Shrewsbry in 2011.

There are common factors shared by these figures.

They were all mid-week evening games against a low standard of opposition, where there was a good chance Arsenal would heavily rotate their starting eleven.

While the League Cup ties had something at stake, the game against BATE Borisov didn’t.

That 30,000 people even showed up is something of an achievement given the circumstances.

At the very least, the people that did attend got to see a fun performance and some excellent goals.

For the record, 30k is only slightly less than the capacity of White Hart Lane and just 11k less than what Stamford Bridge holds when it’s packed to the rafters. It is still more than Stoke holds.