Alexis Sanchez will wait until the summer to move to Manchester City, and not leave during January, according to the Daily Express.

The January transfer window opens on Monday, and many will be wondering what will become of Alexis Sanchez.

Amid speculation that Arsenal could sell him should a good offer come in, the Daily Express have given us this wonderful exclusive about the Chilean’s plans.

In a shocking twist, Alexis might wait until the summer to join Manchester City. 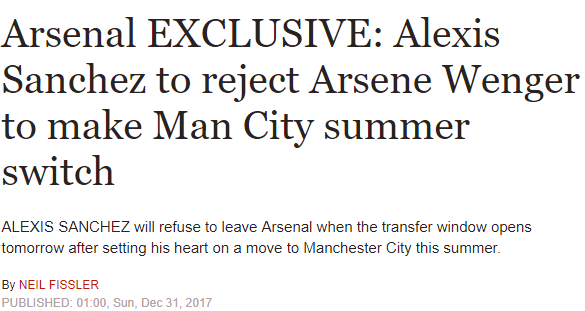 They also mention that Paris St. Germain could sign for £30m, despite the fact that they exclusively revealed ten days ago that they would offer £25m.

Some may also be wondering what became of AC Milan’s £45m bid that the Express exclusively revealed last February.

This latest report appears to be them drawing conclusions from other news reports and then labelling their thoughts as an ‘EXCLUSIVE’.

They mention the alleged rift that Alexis is causing in the dressing room, and come to the convenient conclusion that Wenger will want to offload him as soon as possible.

They also state that Alexis has made up his mind about joining Manchester City as if that’s a new development, even though this fact has been well-known since the summer.

So, Alexis could join Manchester City in the summer.

Who’d have thought it?

He might also join in January. How’s that for an EXCLUSIVE?