Granit Xhaka won’t play in many easier matches than the one he took part in against Northern Ireland on Thursday night at the National Stadium in Belfast.

Described in the match programme as one of the Swiss ‘players to watch’ he was lauded as a ‘playmaker with vision’ but there was little of that on display in this World Cup play-off, first leg. 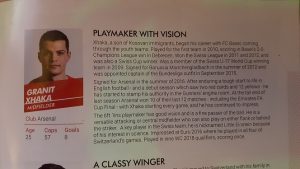 That’s not to say Xhaka didn’t impress. He controlled the midfield like a puppet master, assisted brilliantly by his teammate, Denis Zakaria. The 20-year-old Borussia Monchengladbach man stood out more than any other against a Northern Ireland side set out to spoil.

Given the freedom of Windsor Park, Xhaka was never under pressure and put in just two tackles in the entire game. The second, if you could call it a ‘tackle’, came in the dying minutes when he was about to slide in, slipped and cleaned the Northern Ireland man out, giving the hosts a chance to loft the ball into the box in search of an equaliser.

While Switzerland dominated from the first minute to the last, racking up 64.5% possession, Xhaka’s side needed a penalty to take a lead into the second leg and Northern Ireland will feel incredibly hard done by.

The ball hit Corey Evans on the back, grazing his arm which was tucked into his body.  That it had been struck from about two yards away had no influence on a referee so convinced he’d seen a non-existent handball that he booked Evans, ruling him out of the second leg.

Granit led the Swiss calls for the penalty.

The midfielder had the chance to open the scoring for his side in the first half, side-footing two long-range efforts just over the bar within minutes of each other and there’s no doubt the Swiss deserved to win the game on the basis of chances created. But the manner in which they eventually did win left many feeling sorry for Michael O’Neill’s men

Not Xhaka, however. Speaking after the match in the mixed zone, the Arsenal man said, “We have shown another side of us.

“We were very strong in the fight and above all we were mentally prepared.”

Xhaka was very lucky not to pick up a first-half booking when he showed his petulant side as a goalkick was awarded that he thought should be a corner. Arguing with the referee, he then kicked the ball away, prompting a talking to from the Romanian ref, but nothing more.

Switzerland and Northern Ireland face each other again in Basel on Sunday. “We have to close the tie as early as possible,” Xhaka said about the return fixture.

On Thursday night’s showing, the 11th best team in the world should be more than capable of doing that, sending Granit to Russia next summer.