In October, Ben Sheaf made his Arsenal senior debut against Red Star Belgrade. But what do we know about the 19-year-old?

Unlike some of his Arsenal academy teammates, Sheaf only joined the youth ranks of a professional football team when he was 13, signing for West Ham United reserves.

After three years with the Hammers, the teenager was described as one of the best young midfielders coming through. Arsenal eventually came in for him in 2014, and he moved up from the u18s to the u21s a year later. 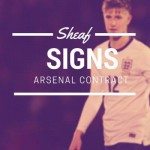 Explaining his love of sport and how that helps him in his football career, Sheaf said in an interview last year: “I enjoy every aspect of sport on and off the field of play and am always open to ideas which I think has helped my development as a footballer.

“This season especially I’ve been playing regularly for the under-21s and in a variety of positions – central midfield, right back and right wing. I feel I’ve matured and the experience of playing in varying roles has made me a better all-round player.”

He began his life in the Arsenal academy playing in central-midfield, but his versatility has since proved very useful in his development. The 19-year-old played almost as many games at centre-back (17) as he has in midfield (20). He’s captained the u23s on multiple occasions, and this season has started to find a home in the new back-three.

Picking up an injury over the summer, Sheaf missed the start of this season. That didn’t just mean academy matches, but also watching on as other players made the step up to the Arsenal first-team. When he eventually returned in mid-October, he was immediately called up to the first-team squad for the trip to Red Star Belgrade, showing how much faith Arsène Wenger has in him.

The Arsenal manager said of the defender a few months ago: “He’s always ahead of the game and his anticipation quality is absolutely huge. He has that kind of mental strength as well. A typical British way of handling things, facing the difficulties with a very cool and intelligent way.

“There is something in him that I believe will allow him to progress always. Because he analyses well what’s happening to him, he assesses well what is going on and that’s why I believe he will have a good career.”

Making his debut in that game against Belgrade by coming off the bench in the closing minutes, Sheaf has since made the squad for the next two Europa League outings and last month’s League Cup tie with Norwich City.

With the belief of the manager, the midfielder could well be the next player to make the step up to the first-team squad on a more permanent basis. For now, he’ll hopefully be content to make cameos and slowly integrate himself into the world of senior football.