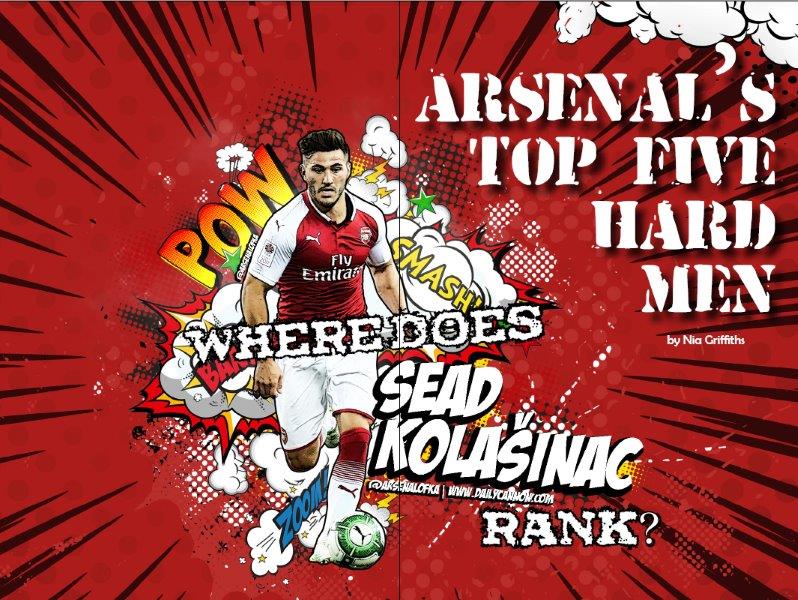 Sead Kolasinac is a pretty hard player but where does he rank in Arsenal’s top five?

Although Kolasinac has only been at Arsenal for five minutes, I have a feeling he could go on to become one of the club’s hardest ever players.

The 24-year-old looks like a tank and a buffalo did the dirty and he was the result.

What’s more, the Bosnia international has only picked up one yellow so far this season, which shows that his aggression is measured and far from reckless.

The wing-back has also scored and assisted twice (three goals if you count the Community Shield, which Jose Mourinho does).

He’s the type of player we need because he’s feared. Not only is he massive but opposition players know he’ll just steamroll through them. He doesn’t care.

Although he’s got a long time before he catches up with the likes of the other Arsenal hard men on the list, he’s made a good start, so I’ll put him at no.5 and hope he continues to do me proud.

But who are the other 4? Read on to find out.

Six foot of solid mass. You wouldn’t want this guy running towards you at full-pace.

The former Schalke left-back has earned himself the nickname ‘Bosnian Hulk’ and now we know why.

Vieira mixed finesse, skill and strength. The midfielder was big and commanding, which is why he made such a good captain.

The Frenchman won the title three times while in north London, as well as the FA Cup, and lead the Invincibles.

Our current assistant manager was part of the Old Guard. He was part of the team when Arsenal could actually defend well, which is concerning when you look at how we defend now.

Presumably Bouldie doesn’t have much say in training…

Along with Adams, Keown was one of the most no-nonsense players we’ve ever had. He loved playing for Arsenal and would defender as if his life depended on it.

Mr. Arsenal. Has there been a harder centre-back in the Premier League since Adams? When he was captain, the Gunners didn’t play the pretty Wenger-ball we later adopted. But we kept teams out.

The Englishman was at the club his entire career and is still revered to this day.