Neil Custis, who writes for the Sun, is furious with Arsenal’s social media team after they trolled fellow journo, Adam ‘Nice Bloke’ Crafton, following the Gunners’ 2-0 win over Spurs on Saturday.

Daily Mail journalist, Crafton, probably didn’t realise the wrath he was about to suffer at the hands of Arsenal’s social media team when he wrote a piece on Arsenal v Tottenham’s combined best XI on Thursday.

Crafton picked Spurs’ entire starting XI, deliberately leaving out the Gunners, who he thought would lose to their rivals during the first North London Derby of the season on Saturday afternoon.

But we didn’t lose. We won. By 2-0 to be exact. And Arsenal’s social media team were not going to allow Crafton to get away with his scathing prediction of how the game would pan out. Whoever runs the Gunners’ Twitter simply replied to the article after the game with a winking emoji and red circle.

Fans then descended on the defenseless journo, which led employee of the Sun, Neil Custis, to step in, saying that he hoped the Arsenal media team were all feeling ‘suitably smug’ with their decision to bring the wrath of their fans down on a ‘thoroughly nice bloke’. 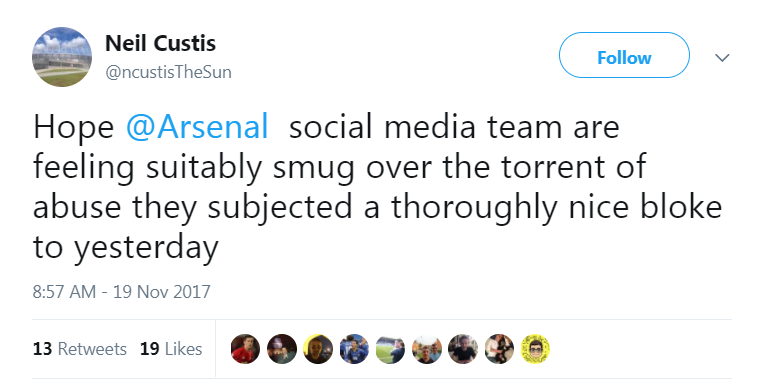 You know, ’cause the Sun would never do anything like that… would they?

Haha state of this from a Sun employee. A SUN EMPLOYEE. You're an embarrassment, mate https://t.co/NrE4SGPWSS

Yeah, I mean imagine a social media team with a reach of millions picking on a thoroughly nice bloke. Who’d do that Neil? pic.twitter.com/cOoSZCi0ou

Mikel Arteta: It’s clicked with Aubameyang what he needs to do