Mohamed Elneny ended up sticking around when many expected him to leave Arsenal over the summer. But was that good news for the Gunners?

At the start of the season, it didn’t seem the Egyptian international was going to get much game-time, as after 67 minutes filling in for the recovering Aaron Ramsey, he then had a four-match break from starting in the Premier League.

As usual, injuries kicked in. With Wilshere apparently not ready, Ramsey picking up a knock and Coquelin out for a few weeks, Elneny found himself in the team a bit more in the recent matches. But his performances weren’t particularly impressive, bar a good game in the win against West Brom.

To me, it seems that the Egyptian is being rewarded for his loyalty and enthusiasm more than anything else. The midfielder reportedly turned down a move to Leicester over the summer, after Arsenal gave him the opportunity to leave.

I rarely see him put in a less-than-committed 90 minutes, and those two factors seem to have convinced Wenger to keep him around. But the problem is that the starting centre-mids are playing like they’re the back-ups.

In my opinion, Granit Xhaka and Aaron Ramsey only managed to get it together for one game against Chelsea, and have been disappointing outside of that this season. If Arsenal had bought an upgrade in the summer, they likely wouldn’t have been in this mess in the Premier League.

We need to give Xhaka the break he seems to need, or let Ramsey recover from injury, without hurting the team. Neither are bad players, they just need a rest, I feel. Instead, Elneny comes in for Ramsey, and Xhaka has to keep playing, resulting in Arsenal losing to Watford. 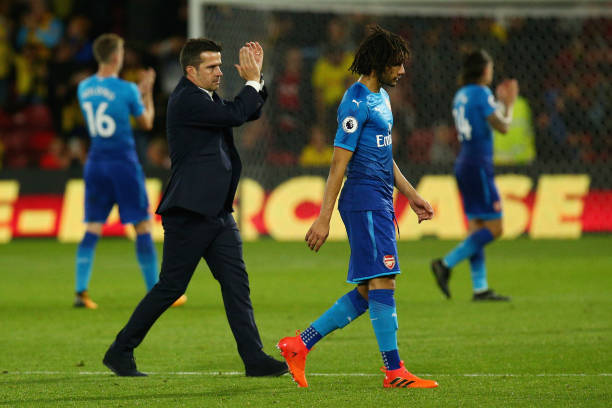 Elneny is a solid option when the team are winning and just need to keep possession, particularly on the bigger pitch at the Emirates. But he doesn’t score goals, we very rarely see him making them. He doesn’t offer as much as Francis Coquelin defensively, in my opinion.

The new formation relies on having midfielders who can perform well at both ends, otherwise the attacks break down or the defence are left to deal with players running at them unchallenged.

Maybe Elneny flat-out refused to go and the Gunners couldn’t afford to bring in someone else until they cut players from the wage bill. But with the World Cup coming up next summer, you would’ve thought it wouldn’t be too hard to convince him that leaving would be the best thing for his international career.

If the situation on the pitch hasn’t changed by January, I think Arsenal should consider trying to force the issue to make a change.