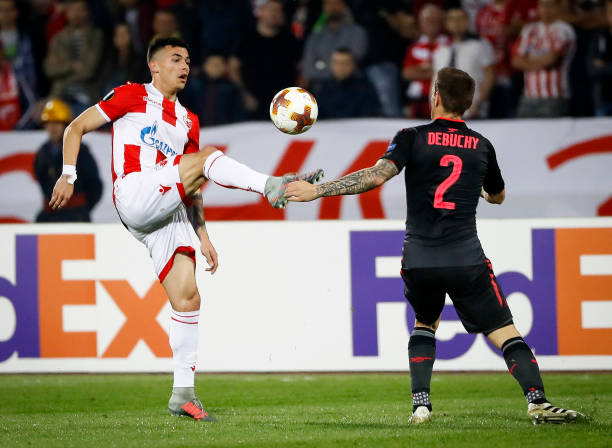 On Thursday evening, Mathieu Debuchy played his first 90 minutes of senior football since that Bournemouth game in November 2016 and… he wasn’t actually too bad.

Arsene Wenger, obviously keen to keep us all on our toes, went with a back three of Rob Holding, Mohamed Elneny and Mathieu Debuchy against Red Star Belgrade in the Europa League on Thursday evening.

Debuchy played 45 minutes in the u23’s 2-0 win over Sunderland on Monday and obviously did enough to prove to the boss that he was ready to return to the first team in some capacity.

The right-back hadn’t been in the senior squad since playing 16 minutes against Bournemouth in November last season when he picked up a hamstring injury. He’d only just returned from a similar problem, which had kept him sidelined for 64 days.

With this in mind, I reckon I probably scored the 32-year-old unfairly low in my player ratings post-match. In hindsight, this was probably more to do with the anxiety I felt over the back three in general. It didn’t feel safe. However, looking back, Debuchy didn’t do badly for a bloke who’s not played in 11 months. I’ve changed the ratings accordingly.

The Frenchman completed 82% of his passes, won five aerial duels and four tackles. The defender also made an interception and FIVE clearances.

He was solid and while I doubt he’ll get into the first team, he showed guts.