After Arsenal put five goals past Everton on Sunday, we looked at the five things learned from the Gunners’ performance.

Arsenal finally picked up their first away win at Goodison Park, beating the Toffees 5-2 despite going behind early on.

Arsenal still know how to play good attacking football on the road.

Before Sunday, the Gunners had scored one goal away from home, a Mertesacker header from a corner against Watford. Against Everton, the team multiplied that overall total by six.

More than that, the goals at Goodison were well-worked, with only the first coming from a rebound or set-piece. 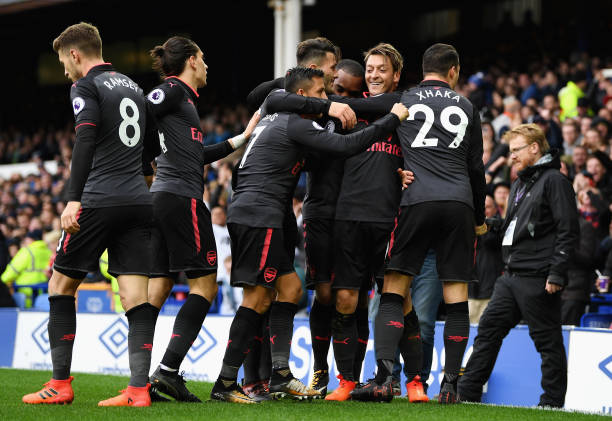 The rest were either slick passing moves or quick counter-attacks, the two things Arsenal tended to be known for in the past.

With Alexis, Lacazette and Özil in the front three for the first time, the team finally found their feet in an attacking sense.

Arsenal had 30 shots against Everton, 14 on target, and scored five goals. Ramsey missed six shots before his seventh went in, Alexis missed six as well before he got his goal, and Lacazette missed three.

That’s before we even look at those who didn’t score. When you create 30 opportunities, that’s not a problem. But I seriously doubt the Gunners are going to get that many chances every game.

The offensive side of Arsenal’s game was so good that it didn’t end up mattering much, but if you go behind to Manchester City or Chelsea you’re in for a lot more trouble.

Okay, so most of us knew this was nonsense before Sunday, but Martin Keown’s claim that Özil has mentally left the football club was clearly shown up at Goodison Park.

Eight chances created (more than any other player in a Premier League match this season), 91% pass accuracy, a goal, an assist, as well as five different defensive contributions, it was a man-of-the-match performance from the German. The perfect response to the critics.

5. Lacazette can score away from home.

Turns out all he needed was a few chances to do so. Against Watford, Lacazette didn’t have a single chance to shoot. At Liverpool, he was benched. And at Stoke, a goal was contentiously ruled out for offside.

Finally, against Everton, Lacazette was given a few chances to score a goal and managed to take one to get off the mark. There were still a few times his runs were ignored (I’m looking at you, Aaron Ramsey), but this was much better overall.