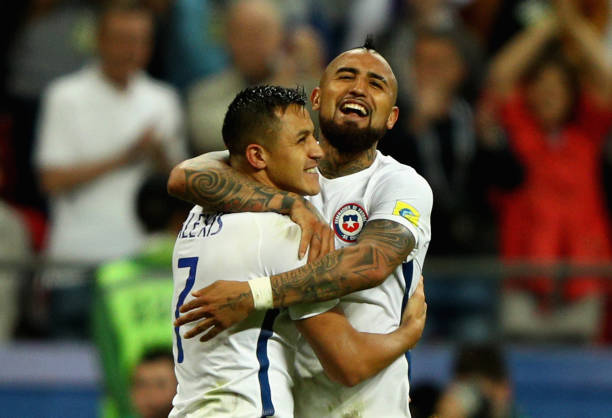 Alexis Sanchez’s Chile teammate, Arturo Vidal, denies that the forward informed his compatriots that he was joining Manchester City on Transfer Deadline Day.

Vidal shot down the rumour that Alexis went around telling his Chile teammates that he was signing for Manchester City and even went as far as claiming the reports were ‘made up’.

“To whom? No, no, to nobody,” Vidal told reporters after Chile’s 3-0 loss against Paraguay, in which the midfielder scored an own goal.

“I think it was all made up because he was very focused on today’s game.”

Obviously City did want Alexis and probably did put in a £60m bid on the final day of the transfer window.

However, the rumour, which originated in the Chilean media, that the 28-year-old had gone around telling his Chile teammates that he was signing for City before they all started cheering as if Arsene Wenger had been holding him captive for three years was a little far-fetched and, as Vidal claims, allegedly untrue.

Chile played Paraguay on 31 August and lost 3-0; Alexis played another 90 minutes for his country.

While the media are once again selecting certain images of the forward looking unhappy, so did the rest of his compatriots. They’d just lost by three goals…

For all we know, Alexis did actually tell his teammates he was going to City and having Vidal claim that he didn’t is just damage control.

To be honest, I don’t care. As long as he pulls on his big boy pants and sorts himself out for the coming season because whether he likes it or not, he’s a Gunner.